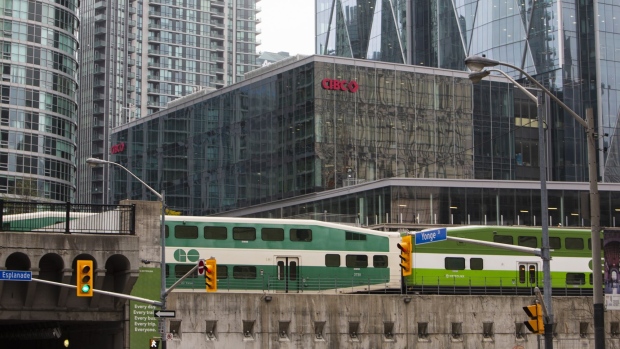 CIBC Square at 81 Bay Street in Toronto, Ontario, Canada, on Thursday, Oct. 7, 2021. Canadian Imperial Bank of Commerce is planning to double the staff of its innovation-banking unit in the next year and a half as a boom in the technology industry boosts demand for venture lending to startups. Photographer: Della Rollins/Bloomberg , Bloomberg

(Bloomberg) -- Canada’s largest banks could raise their dividends as much as 25% once regulators allow them to increase their payouts, according to an investment firm that focuses on financial stocks.

The dividend increase of 20% to 25% could happen even if the banks’ earnings growth stalls, Toronto-based Hamilton Capital Partners said in a note Tuesday. The hikes could be even larger if bank executives want to slow the growth in their capital levels, the firm said.

Canada’s largest banks socked away record amounts of capital during the pandemic to protect against a wave of defaults that never occurred, while also seeing core earnings measures rise.

At the same time, Canada’s Office of the Superintendent of Financial Institutions has prevented them from buying back shares or increasing dividends since March 2020, prompting capital to pile up even more. Canada’s lenders are now “among the best-capitalized banks globally” and are sitting on C$21.4 billion ($17.3 billion) in allowances against loans that are still in good standing, according to Hamilton Capital, which was co-founded by former National Bank of Canada analyst Rob Wessel.

“This huge reserve represents a powerful firewall against unexpected losses,” the firm said. “There has literally never been a time in Canadian bank history where the sector was in a stronger position to pay dividends.”

OSFI’s restrictions should be lifted this quarter, as there is “simply no policy justification” for them to continue, said the firm, which also argues that those restraints should have been lifted two quarters ago.

Peter Routledge, OSFI’s new head, said in a June interview with BNN Bloomberg Television that financial uncertainty was “diminishing” but the regulator wasn’t ready to allow payout increases at the time. “Please, I’d ask folks, be patient,” he said on June 29.