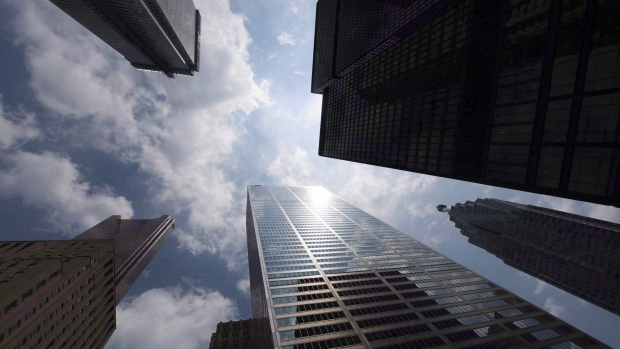 TORONTO -- Canada's biggest banks could deliver another profitable season for investors as third-quarter results starting to roll in this week are expected to get a boost from the strengthening economy.

Analysts expect modest improvements from the Big Six banks, which launch their quarterly earnings reports beginning with Royal Bank on Wednesday, but some suggest the industry could outdo the conservative predictions.

"There always seems to be this hesitancy that somehow the numbers won't be as good," suggested Gareth Watson, vice president of investment management and research at RichardsonGMP.

"But we've always come out of the results saying 'Things weren't as bad as people thought they were going to be."'

It's an issue analysts continue to grapple with in this period of intensified questions about the direction of Canada's housing market and expectations the Bank of Canada could make another move on interest rates later this year. The central bank raised interest rates for the first time in seven years in July, moving from 0.5 per cent to 0.75 per cent, citing "bolstered" confidence about economic growth prospects.

A slight cooling in the real estate sector and the recent interest rate hike could leave a mark on the third quarter, though analysts suggest it would be minimal.

Banks raised their prime rates after the central bank's 25-basis-point increase, but it happened during the final weeks of the third quarter, meaning it'll likely have little impact on the results.

Signs of a slowing real estate market could eventually hit the banks' mortgage portfolios, though Watson suggests it won't happen this year.

"The housing market becomes more problematic when you start getting interest rate increases and mortgage renewals at higher rates -- maybe in 2019 or 2020," Watson said.

"Eventually it will be a big deal, it's just not necessarily an immediate concern, especially for the banks who are pretty darn good at mitigating and controlling risk."

"We think there are plusses and minuses that add up to a decent third-quarter reporting season for the banks," Robert Sedran, an analyst at CIBC World Markets Inc. wrote in a note to investors.

"The plusses include an overall solid operating environment that is supportive of ongoing revenue growth and stable loan losses that should help overcome slowing capital markets revenues and the currency headwinds that have developed."

A stronger Canadian dollar has some observers weighing how currency conversions will impact the financial results of some of the banks with larger U.S. operations. The consensus suggests it won't leave much of a dent for now.

Canadian bank valuations have mostly strengthened coming out of the most recent quarter, Barclays analyst John Aiken wrote in a note.

"We anticipate the trend will continue over the back half of the year, buoyed by the steady domestic economy and the strongest employment landscape since the financial crisis," he said.

Aiken added that "sustainability of earnings growth remains key" as other questions persist, such as the likelihood of another central bank rate hike ahead of slower economic growth expected next year.