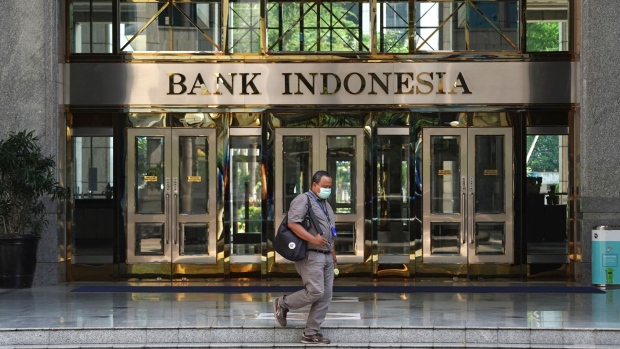 The entrance to the Bank Indonesia headquarters in Jakarta, Indonesia, on Tuesday, Sept. 21, 2021. Indonesia's central bank is expected to keep its policy rate unchanged at a record low to drive a recovery in Southeast Asia's largest economy, as the virus wave subsides and activity gradually resumes. , Bloomberg

Bank Indonesia purchased 14.5 trillion rupiah each of four series of notes due in five to eight years via a private placement, the finance ministry’s debt management office said on Tuesday. Future bond-buying by the central bank will be done gradually, in line with the government’s need to fund its pandemic stimulus, the office said in a statement Tuesday.

Bank Indonesia plans to buy about 215 trillion rupiah of government bonds this year and 224 trillion rupiah in 2022 under its latest round of “burden sharing” arrangement to help finance the state budget. That’s even as the government plans to use its spare cash to buy its own bonds from the market after canceling the rest of its bond auctions this year.