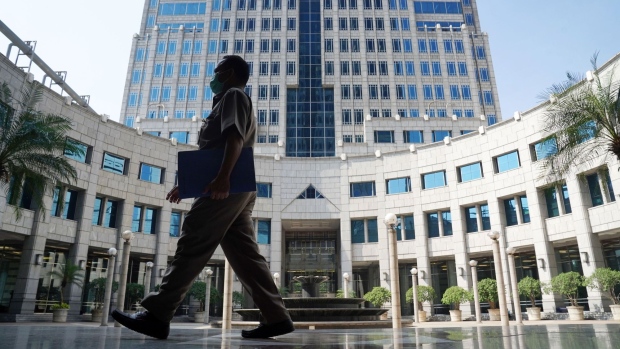 “The principle we will conduct with is what we call a preemptive, ahead-of-the curve, front-loading policy,” Deputy Governor Dody Budi Waluyo said on Wednesday. “We will sequence all measures based on exchange-rate stability, liquidity management, and interest rate policy.”

The central bank would act depending on the latest inflation and rupiah development. “If there’s no risk, we will keep our interest rate as today,” he added.

Global central banks are tightening as inflation surges, with the Federal Reserve expected to signal a rate-hike cycle at the conclusion of its policy meeting later Wednesday. Neighboring Singapore tightened monetary policy in an unscheduled move on Tuesday, while Indonesia said it would rein in excess liquidity with a 300 basis point-increase in the reserve requirement ratio.

Bank Indonesia has used the phrase “preemptive, ahead-of-the curve, front-loading policy” at times when it’s shifting directions, including when it delivered a surprise rate cut in August 2019 or before Governor Perry Warjiyo called an out-of-cycle meeting that kicked off 175 basis points of rate increases in 2018.

“Bank Indonesia’s comments today suggest that regional central banks are becoming more open to acting sooner rather than later in terms of policy normalization,” said ING Groep NV senior economist Nicholas Mapa. With the RRR hikes now scheduled, raising the key rate could be next move once there’s heavy selling pressure on the rupiah, he added.

The currency is Asia’s second-biggest loser so far this year, down 0.7%. Near-term risks could push it to 14,400 a dollar by the end of the first quarter, from 14,351 on Wednesday, said Mitul Kotecha, chief EM Asia and Europe strategist at TD Securities. The pressure will likely lessen once the Fed hikes, with the rupiah seen ending the year at 14,100.

Bank Indonesia has kept its benchmark interest rate at a record low 3.5% since last February, with Warjiyo saying the rate will remain unchanged until there are signs of rising inflation, which isn’t expected until the third quarter.

The yield on Indonesia’s benchmark 10-year bonds were at 6.4% on Wednesday, having climbed almost 40 basis points from its November low. Still, that’s a far cry from the highs of 8.9% in 2018 during the last Fed hike cycle.

Southeast Asia’s largest economy may still need the support of low rates as the omicron strain sends Covid-19 cases to a four-month high and raises risks of another disruptive lockdown. The International Monetary Fund underlined the trade-offs of premature tightening in a Wednesday report, saying Bank Indonesia should be ready to tolerate some level of rupiah volatility to conserve its monetary space.

However, a rate hike as early as February or March cannot be ruled out, depending on the outcome and impact of the Fed’s upcoming decision, according to Wellian Wiranto, economist at Oversea-Chinese Banking Corp. “What is getting clearer to us is essentially a central bank that will not shy away from doing what is necessary to anchor broad rupiah stability,” he said.