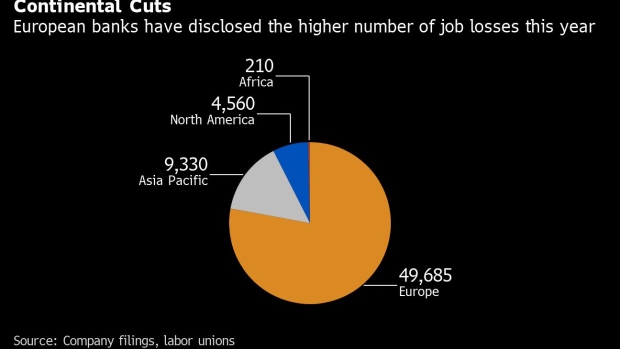 Pedestrians walk near the HSBC Holdings Plc building in the Canary Wharf business, financial and shopping district of London, U.K., on Monday, Sept. 14, 2020. Londoners are steadily increasing their use of public transport after schools reopened, freeing parents to go back to the workplace. , Bloomberg

(Bloomberg) -- Job losses at banks this year are on course to be the deepest for half a decade.

After a pause during lockdown, lenders from Citigroup Inc. to HSBC Holdings Plc have restarted cuts, taking gross losses announced this year to a combined 63,785 jobs, according to a Bloomberg analysis of filings. That puts the industry on track to exceed the almost 80,000 disclosed last year, the biggest retrenchment since 2015.

More than 30 lenders -- from Europe, North America, Asia and Africa -- are behind the planned reductions. The actual total is probably higher because many banks eliminate staff without disclosing their plans. The banks cited a need to reduce expenses to offset the cost of credit souring during the pandemic as well as spending to comply with stricter regulation and invest in digital technology.

Total disclosed job eliminations since the start of 2014 now stand at about half a million. For comparison, JPMorgan Chase & Co., the biggest U.S. bank, had a headcount of 256,710 at the end of June.

Citigroup said this week it will restart job cuts, joining rivals such as Deutsche Bank AG and HSBC, which resumed staff reductions in May and June. The U.S. bank’s reductions will affect less than 1% of its global workforce, which amounted to about 204,000 at the end of the second quarter.

Banks headquartered in Europe, which didn’t bounce back from the 2008 financial crisis as quickly as the U.S., account for the largest share of the announced job cuts. That’s driven largely by HSBC, which said in February that it would reduce its workforce by 35,000 as part of a plan to cut $4.5 billion of costs at underperforming units in the U.S. and Europe.

With the pandemic sowing economic uncertainty, it’s a tough market for unemployed bankers. There’s been a 55% decrease in financial services job vacancies in London in July and a 39% fall in August compared to a year earlier, according to data compiled by recruiter Morgan McKinley.

(Updates with overall number of job cuts in fourth paragraph.)