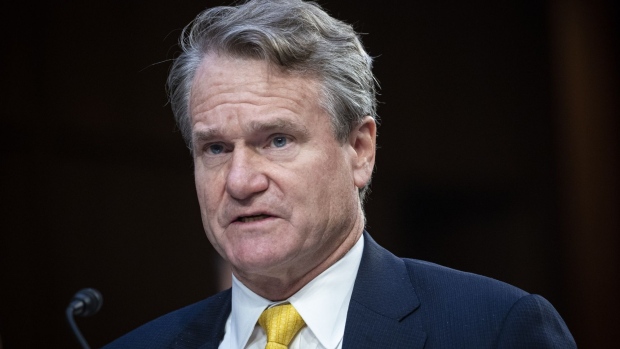 Brian Moynihan during a Senate Banking, Housing, and Urban Affairs Committee hearing in Washington, D.C., US, on Sept. 22. , Bloomberg

(Bloomberg) -- Executives from three of the largest US banks declined to pledge to eliminate overdraft fees when asked if they would do away with them.

“We don’t believe the full elimination of them is actually a good result,” Bank of America Corp. Chief Executive Officer Brian Moynihan said in response to a question from New Jersey Senator Bob Menendez during congressional testimony Thursday.

Jamie Dimon, JPMorgan Chase & Co.’s CEO, said his company offers the product, and “we think it’s the right thing to do.” Noting that 23% of the bank’s US customers opt-in to the fees, Dimon said, “I have faith in the American public to make their own choices.”

Wells Fargo & Co. CEO Charles Scharf said he believed customers should have a choice in whether they use overdraft fees.

Virtually all of the largest US banks have reworked their overdraft policies in recent years, as data showed the fees take an outsize toll on low-income Americans.