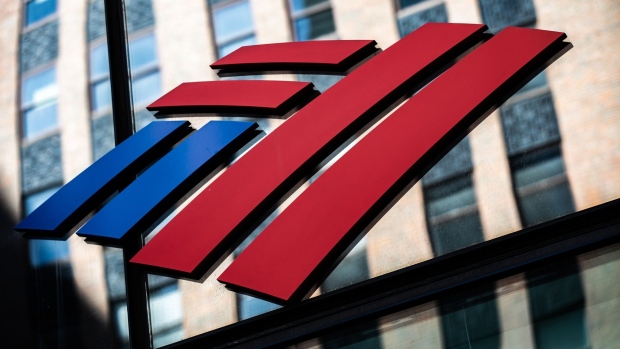 Bank of America Corp. signage is displayed at a branch in New York, U.S., on Sunday, July 12, 2020. Bank of America is scheduled to release earnings figures on July 16. Photographer: Jeenah Moon/Bloomberg , Bloomberg

(Bloomberg) -- Bank of America Corp. is rewarding the majority of its employees with a pool of restricted stock, boosting compensation to retain workers in an otherwise gloomy economic environment.

The incentive, which comes on top of regular compensation, goes to staff who earn up to $500,000 in total annual pay, according to a memo from Chief Executive Officer Brian Moynihan. About 96% of the global workforce is eligible for the reward. This is the sixth year the firm has paid such awards, which now total more than $4 billion, according to the memo, which a company spokesperson confirmed.

“In a time of change in the global economy, we continued to manage our company for the long-term and to do what we do best,” Moynihan said. “We invested in our people, our digital capabilities and the physical spaces where we work together and support our clients, while reinforcing our commitment to manage expenses for the long-term.”

Wall Street firms are trying to navigate keeping their best talent while keeping a lid on costs that have already forced them to trim staff or freeze hiring. Financial firms had previously raised wages and offered other perks to attract and retain talent amid a labor shortage that left a record number of open positions and historically low unemployment.

In addition to the stock award, a limited number of employees will receive a cash bonus based on compensation and local requirements, the memo said. Last year the bank rewarded almost all of its employees with a pool of $1 billion in restricted stock, which applied to about 97% of the global workforce.