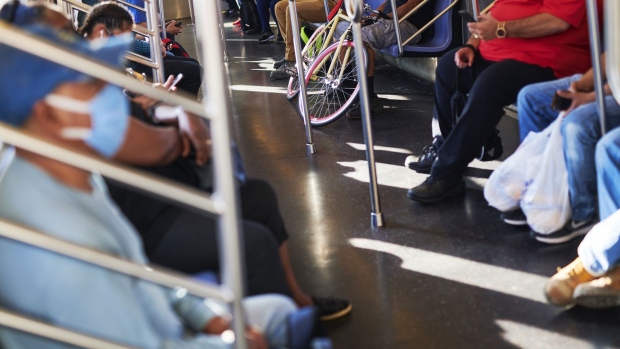 Commuters ride a subway from the Marcy Avenue subway station during morning rush hour in the Brooklyn borough of New York on June 22. , Bloomberg

The debt is backed by fare and toll revenue and state and local subsidies. Bonds due in 2043, the earliest maturity with a 5% coupon, priced at a yield of 4.44%, or 298 basis points above an index of top-rated tax-exempts, according to data compiled by Bloomberg. The final maturity, debt due in 2050 with a 4% coupon, priced with a 4.35% yield, or 277 basis points above the benchmark index, Bloomberg data show.

The debt was sold competitively, with Bank of America winning $600 million while JPMorgan was awarded $300 million, Bloomberg data show.

The MTA, the largest mass-transit system in the U.S., has warned that it’s focused on survival and will need to cut subway service by 40% and slash commuter-rail service by 50% unless the federal government directs $12 billion to cover lost revenue during the coronavirus pandemic.