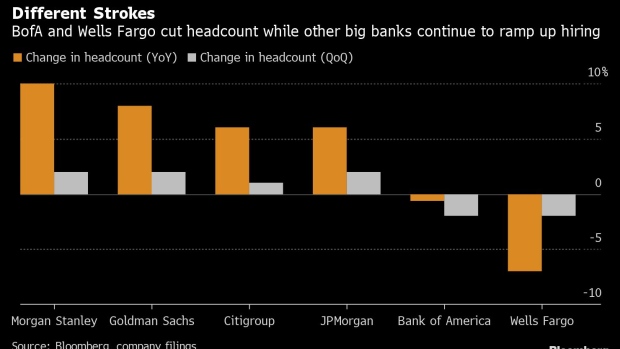 Sun shines on the Bank of America Tower in New York, U.S., on Tuesday, Sept. 7, 2021. In the two decades since terrorists destroyed the Twin Towers, downtown Manhattan has undergone a transformation, drawing in new residents to luxury condos while office buildings have struggled to keep tenants. , Bloomberg

Lenders that reported higher-than-expected costs, including JPMorgan Chase & Co., Goldman Sachs Group Inc. and First Republic Bank, had their shares pummeled by investors. Bank of America Corp., on the other hand, showed companies a different way to manage costs despite rising inflation, a war for talent and soaring tech spending.

“Bank of America is a big contrast to JPMorgan,” Mike Mayo, an analyst at Wells Fargo & Co., said in a phone interview. They’re “doing more with less.”

Bank of America Chief Executive Officer Brian Moynihan credited a lower headcount -- along with processing fewer paper checks -- for peer-beating expense levels. The firm is a rare example of a big bank with fewer employees in the fourth quarter. Wells Fargo trimmed staff as well, but it’s also grappling with Federal Reserve limits on growth.

Higher wages have hurt the entire banking industry, according to Mayo, who downgraded JPMorgan for the first time in seven years after the bank reported fourth-quarter results on Friday that featured a surprisingly steep expense increase.

READ: JPMorgan Drops Most Since 2020 on Plan for Big Spending Hike

The benchmark KBW Bank Index has fallen 5.6% since the beginning of earnings season. JPMorgan and First Republic are the worst performers, with declines of more than 10% each. Still, Mayo says bank stocks have room to run, because the Fed’s expected interest-rate boosts will fuel banks’ profits regardless of what happens with expenses.