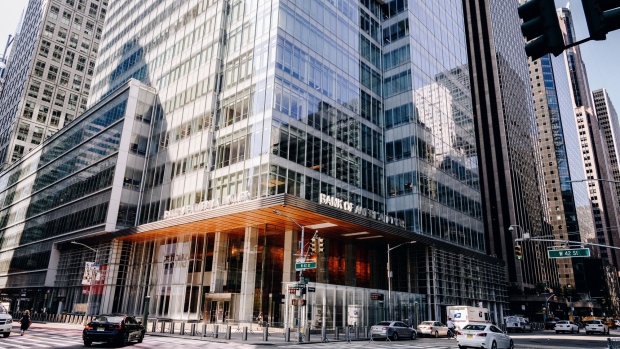 (Bloomberg) -- Bank of America Corp. expects all of its vaccinated employees to return to the office after Labor Day in early September, and will then focus on developing plans for returning unvaccinated workers to its sites.

More than 70,000 of the firm’s employees have voluntarily disclosed their vaccine status to the bank, Chief Executive Officer Brian Moynihan said in a Bloomberg Television interview Thursday. The firm, which has more than 210,000 employees globally, has already invited those who have received their shots to begin returning.

“Right now we’re moving people back who are vaccinated,” Moynihan said. “We’re concentrating on getting them back to work because that allows people to move about under the CDC guidelines without masks and thing like that.”

Bank of America and its rivals have begun unveiling plans in recent weeks to return thousands of workers to towers in New York and elsewhere in coming months as vaccines abound across the U.S. Goldman Sachs Group Inc. asked its New York staff to begin returning this week, marking the most ambitious plan among major Wall Street firms.

“After Labor Day, our view is all the vaccinated teammates will be back and we’ll be able to operate fairly normally, and we’ll then start to make provisions for the other teammates as we move through the fall,” Moynihan said of the Sept. 6 holiday.

In the wide-ranging interview, Moynihan also said it’s still unclear whether signs of a pickup in inflation are temporary.

“You will see the employment market tighten,” he said. “Loan demand we are seeing start to pick up as we move through the months of April, May and June, which is better than it was last fall or coming into the early spring.”

About 70% of the money consumers received from stimulus measures has yet to be spent, another factor in whether inflation will continue to rise, according to Moynihan. The bank’s small-business customers are struggling to find workers, and wage growth is getting “stickier,” he said, adding that customers’ spending is up 20% from pre-pandemic levels.

The firm is beginning to see a pickup in its credit-card business, with originations now down only about 30% -- an improvement from the 70% slump it experienced during the depths of the pandemic. Consumers’ spending at restaurants and on travel has increased dramatically, he said, though the firm is still seeing tepid demand from customers actually borrowing on their cards.

On the outlook for Bank of America’s trading business, Moynihan said the company’s results are “not going to be a heck of a lot different” from competitors, which in recent days have projected big declines from the pandemic-induced surge last year.