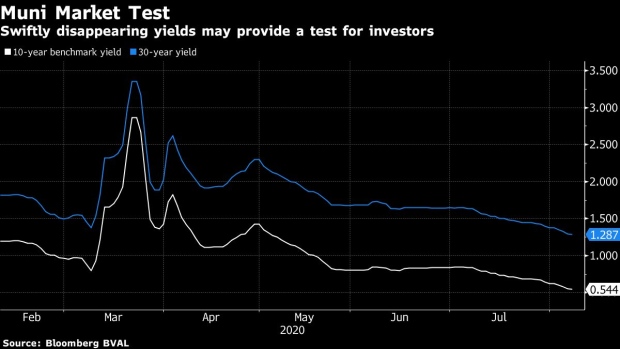 The largest underwriter in the US$3.9 trillion municipal-bond market says the rally is about to face a crucial hurdle.

Bank of America Corp. analysts Yingchen Li and Ian Rogow said they’re watching to see what happens if 10-year benchmark yields hit 0.5 per cent -- a threshold that may mark a test of whether investors continue stampeding into the market.

Such pricing milestones are often watched in other markets, from stocks to mortgages, as a sort of psychological test of whether investors will shift gear if prices seem to heady or payouts too low.

Prices in the state and local government bond market have rebounded sharply since March as investors poured billions of dollars back into mutual funds, sending yields tumbling to the lowest in decades. That’s raised a question of whether the buy-and-hold investors who dominate the market will pull back if yields keep dropping, especially given the steady drumbeat of news about the financial hit the pandemic is dealing to states and cities.

Bloomberg’s 10-year benchmark yield has slipped to 0.54 per cent, the lowest since it was started in 2011 and near Bank of America’s threshold.

“By the time it gets there, it may bounce back if there’s not enough demand,” Li said in a telephone interview. “If the demand for muni market is overwhelming, it will go right through it.”

They said 30-year yields are already around such an inflection point, with the next test seen once it hits 1 per cent.