Bank of America Corp. (BAC.N) dropped after it said the interest-rate boost that lifted first-quarter earnings is likely to fade over the rest of this year.

Net interest income will probably increase 3 per cent for 2019, down from 6 per cent last year and 5 per cent in the first quarter, Chief Financial Officer Paul Donofrio said in a call with investors Tuesday. That may mean slowing growth for a consumer unit that drove profit to a record in the first three months of the year.

Consumer banks are reaping the benefits of the Federal Reserve’s four interest-rate increases last year and a relatively buoyant U.S. economy. The first quarter could be the last hurrah for that catalyst as the Fed pauses its rate-tightening cycle and investors prepare for the next recession.

Bank of America’s outlook is lower than the growth of more than 4 per cent that analysts had expected, Buckingham Research Group’s James Mitchell wrote in a note to clients Tuesday.

Net interest income at the consumer unit -- revenue from customers’ loan payments minus what the bank pays depositors -- climbed 9.7 per cent in first three months of 2019 from a year earlier, fueled by a rise in loans. That outweighed a 13 per cent drop in trading revenue. The performance echoes that of Bank of America’s bigger competitor, JPMorgan Chase & Co., where NII also rose and trading revenue fell.

“Economic growth and consumer activity in the U.S. continue to be solid,” Chief Executive Officer Brian Moynihan said in a statement Tuesday. “It was a challenging capital-markets environment, but our team and platform are optimized to serve clients and generate stable revenues across a range of market conditions over time.’’

Bank of America’s trading and investment-bank results reflected investor caution even after the S&P 500 Index recouped most of its losses from a selloff at the end of 2018.

Trading revenue fell to US$3.55 billion, beating analysts’ estimates of US$3.49 billion. Investment-banking fees slipped 7 per cent to US$1.26 billion, compared with analysts’ average estimate of US$1.29 billion. Still, Donofrio said the firm is gaining share in the banking business as it looks to overhaul that unit.

Average loans in the consumer business climbed 5 per cent, the Charlotte, North Carolina-based company said in the statement. Revenue from the unit jumped 7.3 per cent to US$9.63 billion. The bank’s net interest margin rose to 2.51 per cent from 2.42 per cent a year earlier.

Chief Financial Officer Paul Donofrio said on a conference call with journalists that the strong economy driving that demand will likely continue.

“We don’t see any evidence of a recession,” Donofrio said. “If a recession were to come, we are very well prepared.” 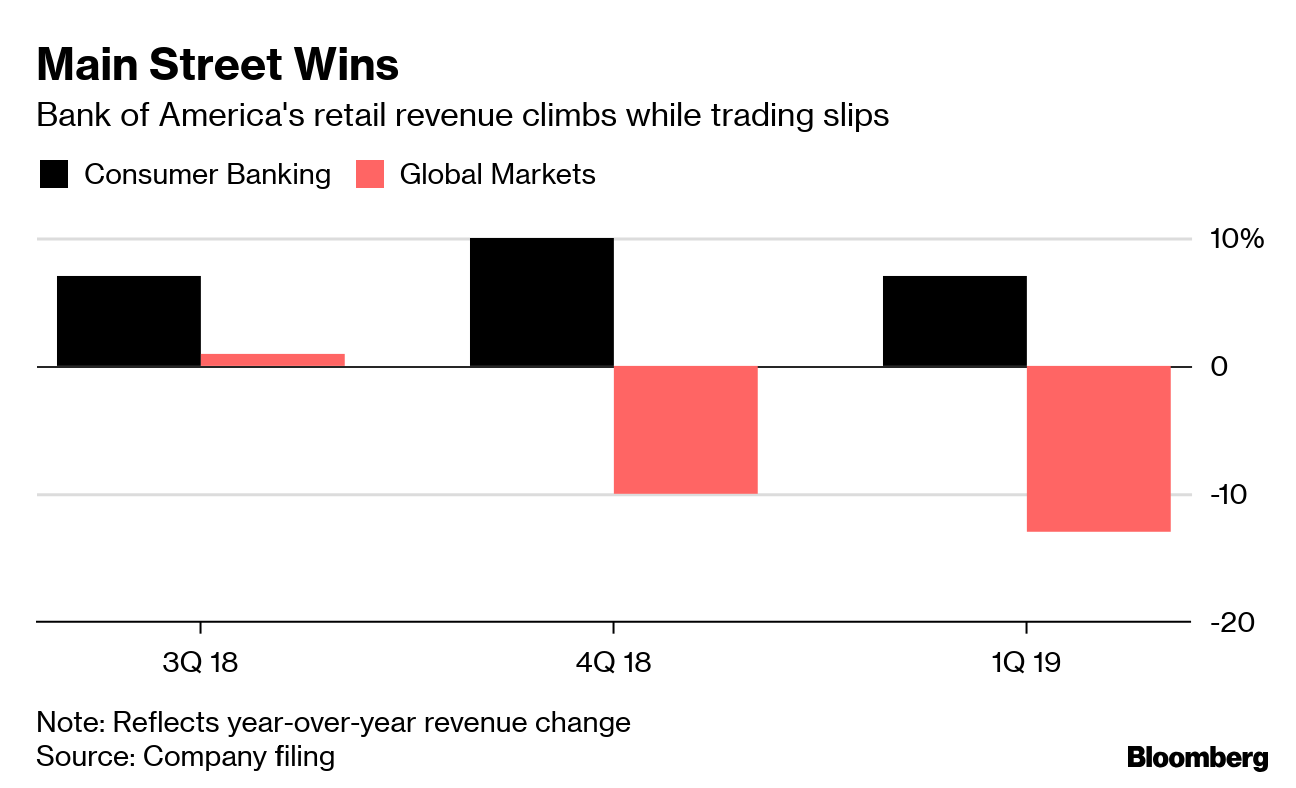 -The efficiency ratio, a measure of profitability, improved to 57.5 per cent from 60 per cent a year earlier.

-Operating leverage was positive for the 17th consecutive quarter.

-The provision for credit losses increased US$179 million to US$1 billion.

-The net charge-off ratio increased 3 basis points to 0.43 per cent.