Most 'powerful' stimulus we can get right now is a 'boost to consumer confidence': Economist

Market operation data from the Bank of Canada show benchmark bonds -- those currently being sold by the government, as opposed to older debt -- are making up a growing share of the central bank’s secondary market purchases.

A move to buy larger quantities of benchmarks is natural for the Bank of Canada, as the growing size of its holdings forces it into the most liquid parts of the market as older issues become less available. But it comes with a risk: It means the bank’s quantitative easing program will increasingly mirror government debt sales at a time when opposition lawmakers are warning it against directly financing Prime Minister Justin Trudeau’s fiscal agenda.

The bank plunged into financial markets in the early days of the pandemic. But analysts are predicting the pace of government bond purchases -- at a minimum of $5 billion a week -- will prove too large for the nation’s outstanding bond market.

“The reason the Bank of Canada has to buy some of these newly issued securities is because the Canadian bond market’s too small otherwise,” said Ian Pollick, head of fixed income, currency and commodity research at Canadian Imperial Bank of Commerce. “You can’t remove a huge amount of off-the-run securities in Canada, because there’s just not enough of them to go around.”

The central bank has pledged to continue buying bonds until the nation’s recovery is “well underway.” Governor Tiff Macklem has said the asset purchase program -- which has acquired $156 billion in Canadian government bonds to date -- complements the central bank’s main policy tool, which is a pledge not to raise its 0.25 per cent benchmark interest rate until inflation returns “sustainably” to two per cent.

At the current pace, the central bank will control more than half of Canada’s government bond market by the end of next year, from 32 per cent today, according to Pollick’s estimates.

Pollick expects the central bank will eventually need to reduce its purchases altogether and consider alternative tools -- such as yield curve control -- to keep borrowing costs low if needed. In the meantime, the bank is gravitating toward benchmark bonds, where all the new supply is being created.

About 44 per cent of the $15.7 billion in bonds bought by the central bank so far this month were maturities also auctioned by the government in October. That’s up from 37 per cent in September and 27 per cent in August. It’s also well above the average of 24 per cent since the start of the quantitative easing program. Last week, almost half of purchases under the program were bonds that had also been auctioned in October. 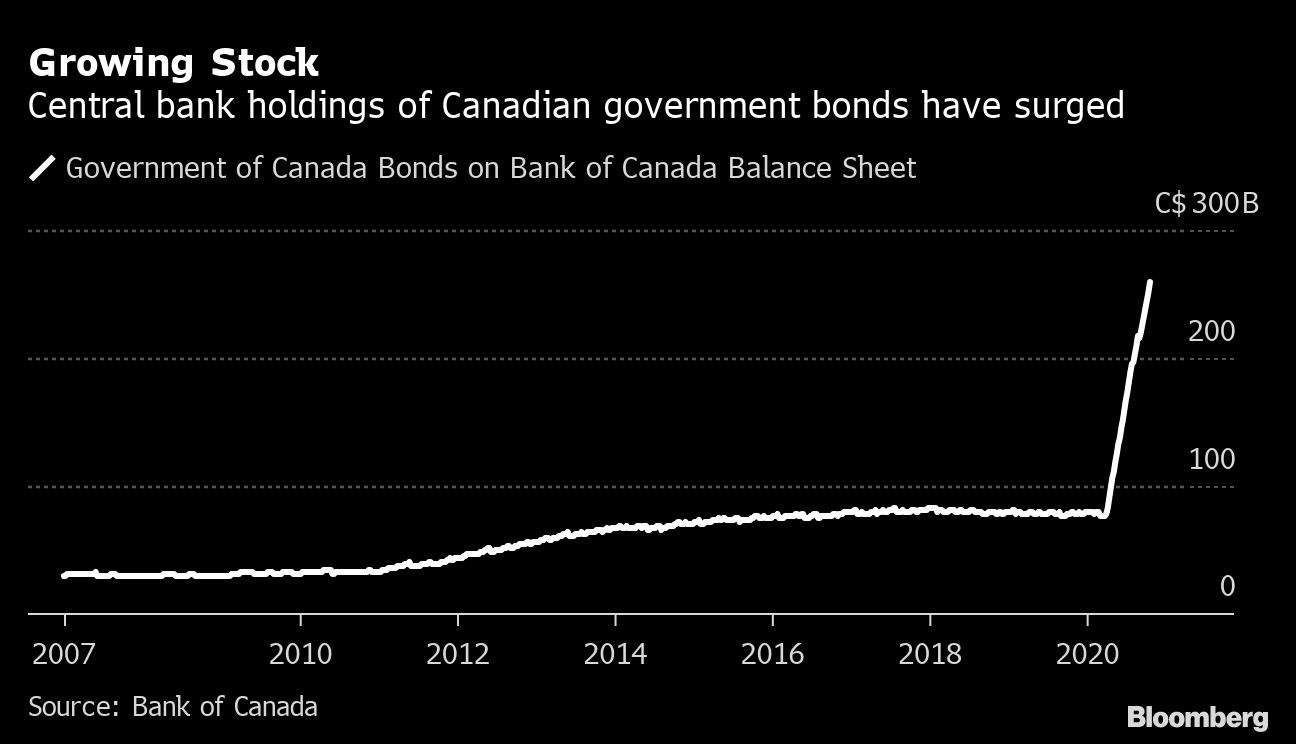 Pollick said he anticipates the Bank of Canada will formalize its strategy of benchmark purchases as early as this Wednesday’s policy decision. In addition to being the most liquid part of the market, officials can argue it also provides a bigger stimulus punch since other borrowing rates, including corporate rates, are pegged to government benchmarks, he said.

At the same time, by focusing its buying in the secondary market, the Bank of Canada can still claim it’s not directly financing the government, Pollick said. Bank officials can argue “investors are doing the hard work,” he said.

One Conservative lawmaker warned this month his party will give greater scrutiny to the central bank’s activities if it’s financing government spending beyond immediate Covid-19 emergency measures. “If the Bank of Canada does want to start getting more and more political, then it will be held to the same level of political accountability as other political entities,” Pierre Poilievre said in an interview with Bloomberg.