Bank of Canada sees rate hike in second half of 2022

The Bank of Canada took the biggest step yet by a major economy to reduce emergency levels of monetary stimulus as it hailed a stronger-than-expected recovery from the pandemic.

Policy makers led by Governor Tiff Macklem said Wednesday they would scale back their purchases of government debt by a quarter to $3 billion (US$2.4 billion) and accelerate the timetable for a possible interest-rate increase.

The upbeat turn toward plotting a return to more normal policy has been resisted by counterparts elsewhere, including the U.S. Federal Reserve. Investors reacted by boosting the Canadian dollar to its highest since January.

“This is a fairly hawkish message cast by the Bank of Canada,” Simon Harvey, a senior foreign exchange analyst at Monex Canada, said by email. “They seem quite confident that once the current wave of infections subsides the economic recovery will be robust.”

The central bank reiterated its guidance that it won’t raise its benchmark interest rate, currently at 0.25 per cent, until the recovery is complete and inflation is sustainably at 2 per cent. But it changed its projections on when that would happen.

In new quarterly economic projections, it revised higher its growth estimate for 2021 by more than two percentage points, to 6.5 per cent, and brought forward its forecasts for when slack would be absorbed.

“Based on the Bank’s latest projection, this is now expected to happen some time in the second half of 2022,” the bank said in its latest Monetary Policy Report.

At a subsequent press conference, Macklem emphasized that the central bank’s commitment is not to raise interest rates before the economy fully recovers, and that any future hike would reflect economic conditions at the time.

The Federal Reserve, by contrast, says it won’t begin scaling back the pace of its US$120 billion-a-month bond purchases until it sees “substantial further progress” on employment and inflation. Economists surveyed by Bloomberg ahead of the Fed’s March meeting didn’t expect that to happen until 2022. 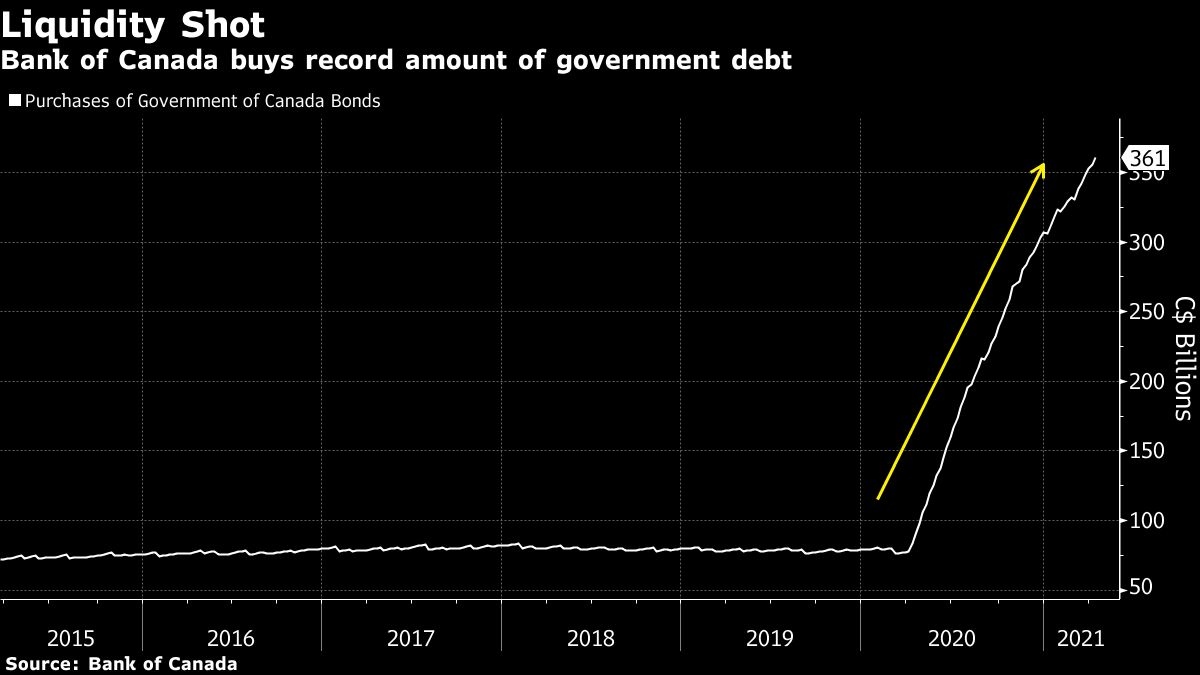 Macklem’s growth revisions bring policy makers more into line with economist projections. Markets had already been pricing in a rate increase in 2022 before Wednesday’s changes. Investors have also been anticipating that Canada’s central bank would be more aggressive than the Federal Reserve in its normalization path.

Swaps trading suggests about a 50 per cent chance of a hike in Canada this time next year. Almost three hikes are fully priced in over the next two years, and five hikes over the next three years.

Chair Jerome Powell, for his part, has been careful to avoid putting a date on beginning to taper asset purchases in the U.S., though his No. 2, Vice Chair Richard Clarida, has said he doesn’t expect those thresholds to be met this year.

Powell has promised to give investors plenty of warning that officials are beginning to debate the timing of a move. He’s been up front in wanting to avoid surprising markets and re-running the 2013 Taper Tantrum, when unexpected news that the Fed was thinking of paring its purchases sent financial markets into a spasm with harmful economic consequences.

The Canadian dollar rose as much as 0.8 per cent to $1.2510 per U.S. dollar. The market consensus was for the Bank of Canada to pare back its government bond purchases in line with the bank’s new guidance, without altering expectations for no rate hike before 2023.

Even before Wednesday’s statement, investors were anticipating the Bank of Canada to be among the most aggressive advanced economies in unwinding stimulus. One reason may be that Canada’s jobs market has recouped 90 per cent of losses during the pandemic, versus just over 60 per cent in the U.S.

Still, policy makers remain cautious despite the more positive tone, saying there’s more uncertainty than usual that might affect its estimates for slack. Officials also highlighted concern about the uneven recovery and the potential for scarring in the labor market.

On technical grounds alone, the central bank’s purchases of Canadian government bonds need to be pared back as the government’s financing requirements drop. It now owns more than 40 per cent of outstanding bonds and is on pace to go above 50 per cent in a few months as Prime Minister Justin Trudeau’s government reduces its issuance by about $90 billion this year.

It’s actually the second time the Bank of Canada has tapered during the pandemic. Macklem reduced the bank’s minimum weekly purchases in October, which had been $5 billion initially. But at the time, officials characterized the taper as neutral in terms of stimulus, because they shifted purchases toward long-term bonds concurrently.

This time, the central bank acknowledges that its reduction in purchases will have an “incremental” impact on stimulus.