The Bank of Canada took another big step to rein in emergency levels of stimulus, once again tapering its bond purchases in a sign of optimism about the speed of the recovery.

Policy makers led by Governor Tiff Macklem said Wednesday that they would reduce their weekly purchases of government debt by one-third to $2 billion (US$1.6 billion). Officials held the benchmark overnight interest rate at 0.25 per cent, while indicating they don’t expect any hikes before at least the second half of next year -- in line with previous guidance.

The decision to taper advances the central bank’s gradual return to more normal policy, which has put Macklem on the vanguard of unwinding stimulus among his peers. It’s the third time officials have downsized the asset purchase program, and it reinforces expectations the Bank of Canada will be among the first central banks in advanced economies to hike rates.

“This adjustment reflects continued progress towards recovery and the Bank’s increased confidence in the strength of the Canadian economic outlook,” Macklem said in the opening statement of his press conference.

Wednesday’s decision was widely predicted by economists, and is in line with market expectations of a hiking cycle that starts in the second half of next year, with multiple increases needed to cool an economy that will likely be running too hot in 2023.

Swaps trading suggests investors are fully pricing in a hike over the next 12 months, and a total of four over the next two years, which would leave Canada with one of the highest policy rates among advanced economies.

The Federal Reserve isn’t quite as optimistic as the Bank of Canada is in the near term. Chair Jerome Powell is preparing to tell Congress on Wednesday that the U.S. economy isn’t ready for bond tapering. “Reaching the standard of ‘substantial further progress’ is still a ways off,” he said in prepared remarks.

“For now, Governor Macklem remains one of, if not the most hawkish major central banker,” Frances Donald, chief economist at Manulife Asset Management, said by email.

The Canadian dollar erased gains after the statement, trading little changed at $1.2513 per U.S. dollar at 12:19 p.m. in Toronto trading. It had been up as much as 0.7 per cent, as some investors anticipated an even more hawkish stance from the Bank of Canada. The loonie is the second best performing major currency so far this year, up 1.7 per cent against the U.S. dollar.

Bank of Canada officials reiterated that future taperings will depend on their assessment of the “strength and durability” of the recovery. Analysts anticipate the outlook will allow Macklem to reduce purchases to about $1 billion per week later this year, which would bring the central bank near a neutral pace where holdings remain unchanged as securities mature. 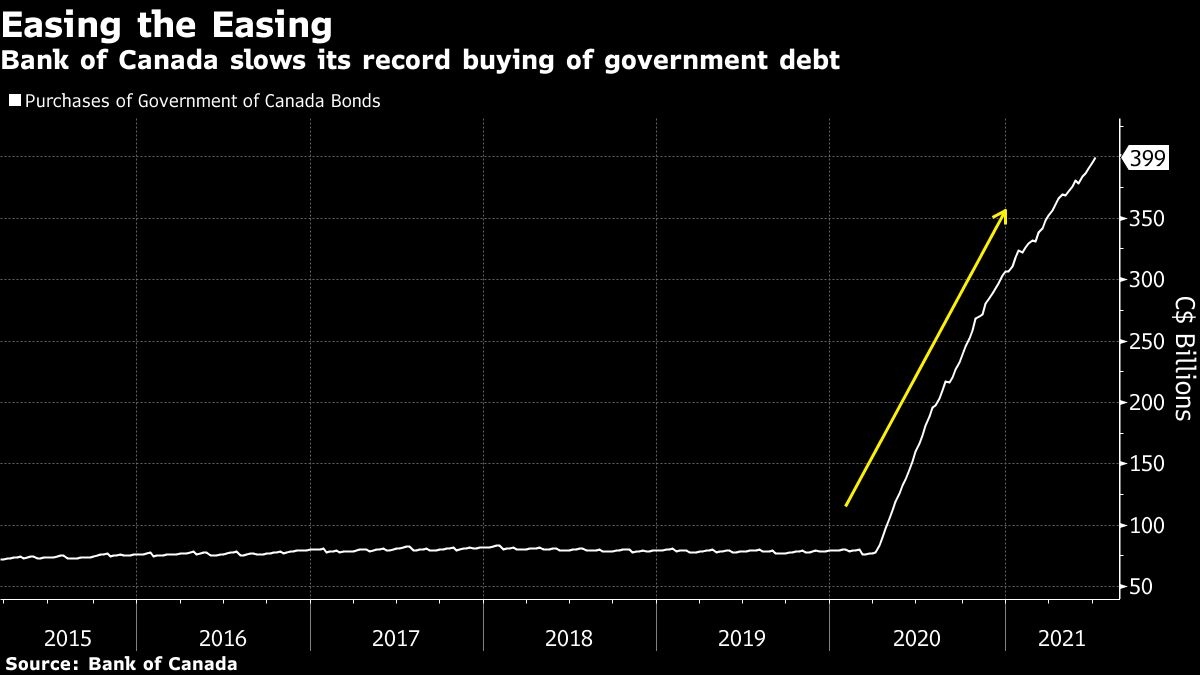 The Bank of Canada has said it wants to stop adding to its holdings of government bonds before it turns its attention to debating rate increases, but officials chose not to accelerate the projected timeline for a possible hike on Wednesday.

The bank reiterated guidance that it won’t raise its benchmark rate until the recovery is complete and inflation is sustainably at 2 per cent. New projections released alongside the rate statement show that won’t happen until the second half of next year, in line with its previous forecasts.

In its latest Monetary Policy Report, the Bank of Canada revised higher its profile for output and inflation amid growing optimism that households will start spending hoards of cash they’ve accumulated over the past year.

The bank now sees households spending 20 per cent of the excess savings accumulated during the pandemic, something it hadn’t predict in its April report.

Still, the central bank maintained plenty of caution in its forecasts, sticking to projections that the run up of inflation will be temporary in an economy that will continue to carry slack for some time. The Ottawa-based central bank emphasized the importance of achieving a “full and inclusive” economic recovery, while Macklem underscored how he will be looking at a long list of labor market indicators to gauge the extent to which a full rebound has occurred.

While conceding that inflation will remain above 3 per cent for much of the rest of this year, the central bank said the uptick reflects factors like gasoline prices, base effects from last year’s lockdowns and supply chain constraints that should fade. They see consumer price gains falling back down to near their 2 per cent target later in 2022 because of lingering excess supply.

The economy will be in a period of excess demand by 2023, the Bank of Canada projected.