Bank of Canada policy makers aren’t worried about the recent run up of inflation they believe is being driven largely by temporary factors, according to a top official.

The pick-up in Canadian inflation to above 3 per cent was one of the key issues discussed by policy makers in deliberations this week, Deputy Governor Tim Lane said in a speech after the central bank’s stand-pat decision Wednesday. 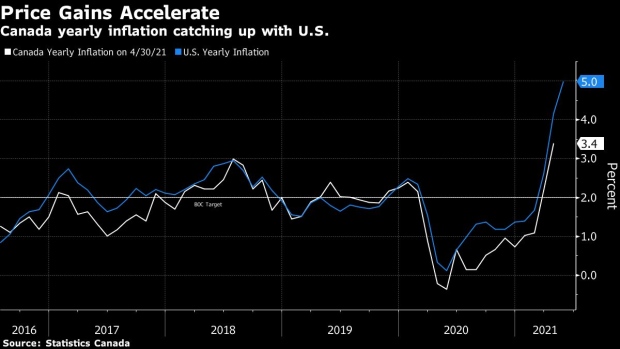 Officials agreed the higher-than-expected inflation is largely due to unfavorable year-ago comparisons, Lane said on Thursday, with continued excess supply expected to put downward pressure on prices once the base effects abate.

“These base-year effects are, by definition, transitory -- they will not persist beyond the next few months,” Lane said in prepared remarks. “What will persist until we see a complete recovery is the underlying slack in the economy.”

“This slack will continue to put downward pressure on inflation as these base-year effects fade,” he said.

Lane’s speech is an attempt to brush off worries about faster inflation that could prompt Canadians and investors to anticipate an accelerated exit from emergency monetary policy settings. Annual inflation in Canada already hit 3.4 per cent in April, and the deputy governor said the central bank expects it to remain around 3 per cent over next several months before moderating.

On Thursday, the U.S. posted a larger-than-expected 5 per cent in annual inflation for May. Economists there are also shrugging it off as a result of temporary supply chain pressures in the aftermath of the pandemic.

The Bank of Canada left its key interest rate at a historic low and maintained its current pace of bond purchases this week in what is considered a placeholder decision that kept expectations intact for another reduction in stimulus next month.

The central bank was among the first from advanced economies to shift to a less expansionary policy in April, when it accelerated the timetable for a possible interest-rate increase and pared back its bond purchases. Another taper is expected as soon as the Bank of Canada’s decision on July 14.

Lane reiterated language in Wednesday’s statement that indicated the Bank of Canada is optimistic about the near-term outlook, despite some weak data in recent months because of a spate of lockdowns.

He said the economy is on track to rebound largely as was expected when the Bank of Canada released its quarterly projections in April.

Lane even acknowledged -- in some length -- there remains a risk of persistent cost pressures that the central bank will need to monitor closely. These could include higher prices for raw materials, or supply chain disruptions.

At the same time, there’s a good chance productivity gains will allow the economy to grow more than expected without fueling inflation, he said.

In the virtual speech, Lane discussed ways the pandemic is accelerating a digital transformation in the country, allowing people to work and shop remotely. This shift toward technology also has implications for monetary policy, as it made the country more resilient to the pandemic-induced lockdowns.

“There is no doubt the recession caused by the pandemic, like all recessions, will result in lost capacity and scarring,” Lane said Thursday. “But the accelerated digital transformation has supported resilience so much that we now think the damage to potential will be less than we earlier feared.”