Only the beginning of quantitative easing: BMO's Porter

The Bank of Canada announced a large scale asset purchase program and cut its benchmark interest rate to a record low in a bid to ease financial-market strain and shield the nation’s economy from coronavirus fallout.

The central bank lowered its policy rate Friday by another half a percentage point to 0.25 per cent, adding in a statement that the unscheduled decision brings the benchmark as low as policy makers are willing to take it for now. It also announced for the first time it plans to start buying a minimum of $5 billion (US$3.5 billion) a week in government securities as well as short-term debt issued by companies.

The move was necessitated by quickly deteriorating conditions, including a flood of new jobless claims last week, that suggest the economy is poised to suffer one of the sharpest drops in economic activity in history. The energy-heavy Canadian economy is also having to contend with the crash in oil prices. At a press conference, Governor Stephen Poloz said the primary objective is to restore proper functioning in the financial system, which he said remains extremely strained, particularly for a commercial paper market that has “frozen.”

“The intent of our decision today is two-fold: to immediately support the financial system so it keeps on providing credit, and, over the longer term, to lay the foundation for the economy’s return to normalcy,” Poloz said in his opening statement. 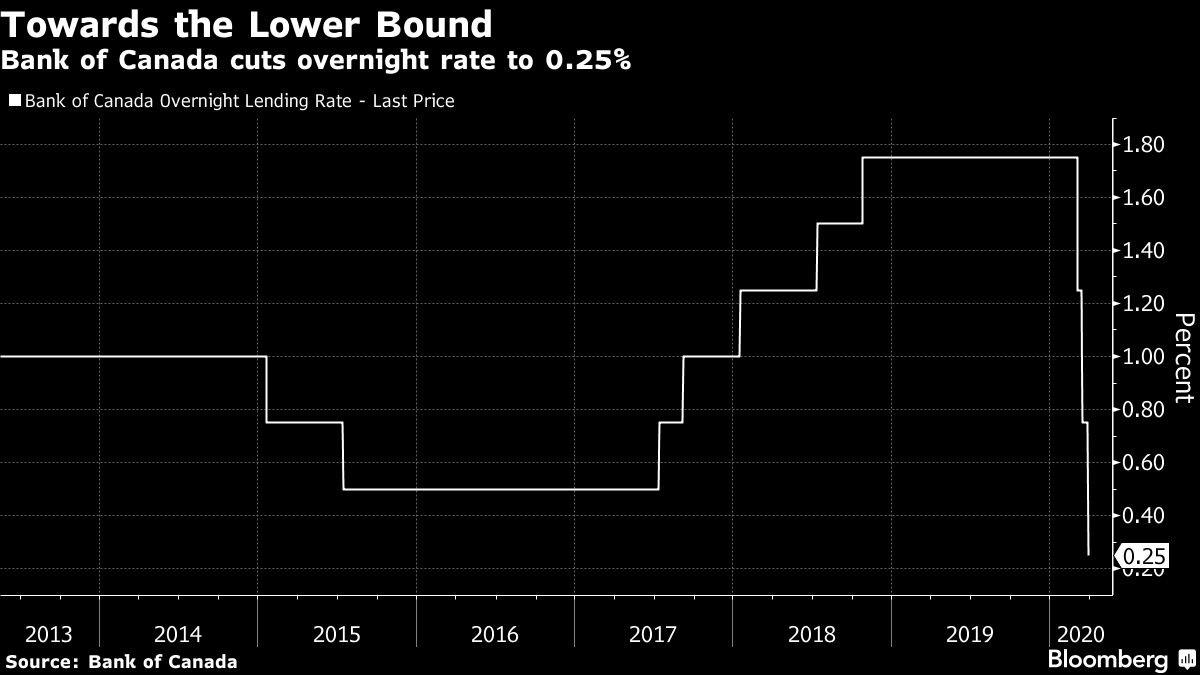 Poloz also seemed reluctant to call the actions “quantitative easing,” even though he said he wouldn’t argue against characterizing the move as such. Quantitative easing is usually associated with trying to bring down rates further out in maturity, Poloz said. The Bank of Canada’s purchases will instead take place across the yield curve.

“When we’re adopting a true QE program we would announce it as such,” Poloz said, preferring instead to call it large-scale asset purchases.

Even still, the central bank’s intervention could be far reaching and seems to be open ended. Poloz said the central bank will buy securities until after a recovery starts, while adding the central bank has other tools available to continue injecting liquidity into markets and adding stimulus. In its rate statement, the Bank of Canada said it will take additional actions to support the economy if needed.

“We have said we will keep those purchases in place, we will continue to purchase until such time as the economic recovery is well underway,” Poloz said. “Those things can be done in very, very large amounts -- literally unlimited if you like. In those tools we have as much room to maneuver as you would like.”

The Bank of Canada last cut rates to these levels in 2009, during the global financial crisis. The move today is also its largest foray into large scale asset purchases.

Friday’s actions by Poloz are part of a wave of policy rate cuts around the world and brings Canada’s benchmark rate closer to most other advanced industrialized economies.

The Bank of Canada has now lowered interest rates three times this month, with a cumulative easing of 1.5 percentage points. The Federal Reserve has also cut by 150 basis points this month.

Friday’s asset purchase announcements add to a slew of new liquidity measures to inject cash into the banking system and money markets and to ensure it can handle any market-wide stresses in the financial system.

Poloz said he’s not concerned the central bank is doing too much. “Some may suggest this is using a lot of firepower but I think a firefighter has never been criticized for using too much water,” the governor said.