There’s a 50% chance BoC will tighten into a recession: Paul Sandhu

The Bank of Canada raised its policy interest rate by half a percentage point in its biggest hike in 22 years, and said rates are poised to move significantly higher as it aggressively wrestles inflation down from a three-decade high.

Policymakers led by Governor Tiff Macklem increased the central bank’s overnight benchmark to 1 per cent on Wednesday. Macklem said he expects rates will return to what they consider the “neutral range” of 2 per cent and 3 per cent, with policy makers prepared to move “forcefully” if needed.

The bank also said it will stop purchasing government bonds later this month to start shrinking its balance sheet, another form of stimulus withdrawal.

“The economy can handle higher interest rates, and they are needed,” Macklem said at a news conference in Ottawa.

Short-term bonds fell after the report, pushing Canada’s benchmark two-year yield to as high as 2.346 per cent, before reversing those losses. The loonie strengthened, however, gaining 0.4 per cent to $1.2593 per U.S. dollar at 12:29 p.m. in Toronto trading.

The policy actions mark an acceleration of what’s expected to be one of the most aggressive monetary tightening campaigns ever by the Bank of Canada, a tacit recognition from the central bank that it needs to quickly exit from ultra-loose policy before inflation becomes sticky.

“There is an increasing risk that expectations of elevated inflation could become entrenched,” officials said in the rate statement, adding the bank will “use its monetary tools to return inflation to target and keep inflation expectations well-anchored.”

In what policymakers described as a “substantial upward revision,” inflation is now seen averaging near 6 per cent in the first half of 2022, before easing to about 2.5 per cent in the second half of next year and to around its 2 per cent target by the end of 2024.

Inflation is projected to average 5.3 per cent in 2022, versus forecasts in January of 4.2 per cent. Price growth will slow to 2.8 per cent on average in 2023, versus previous forecasts of 2.3 per cent. 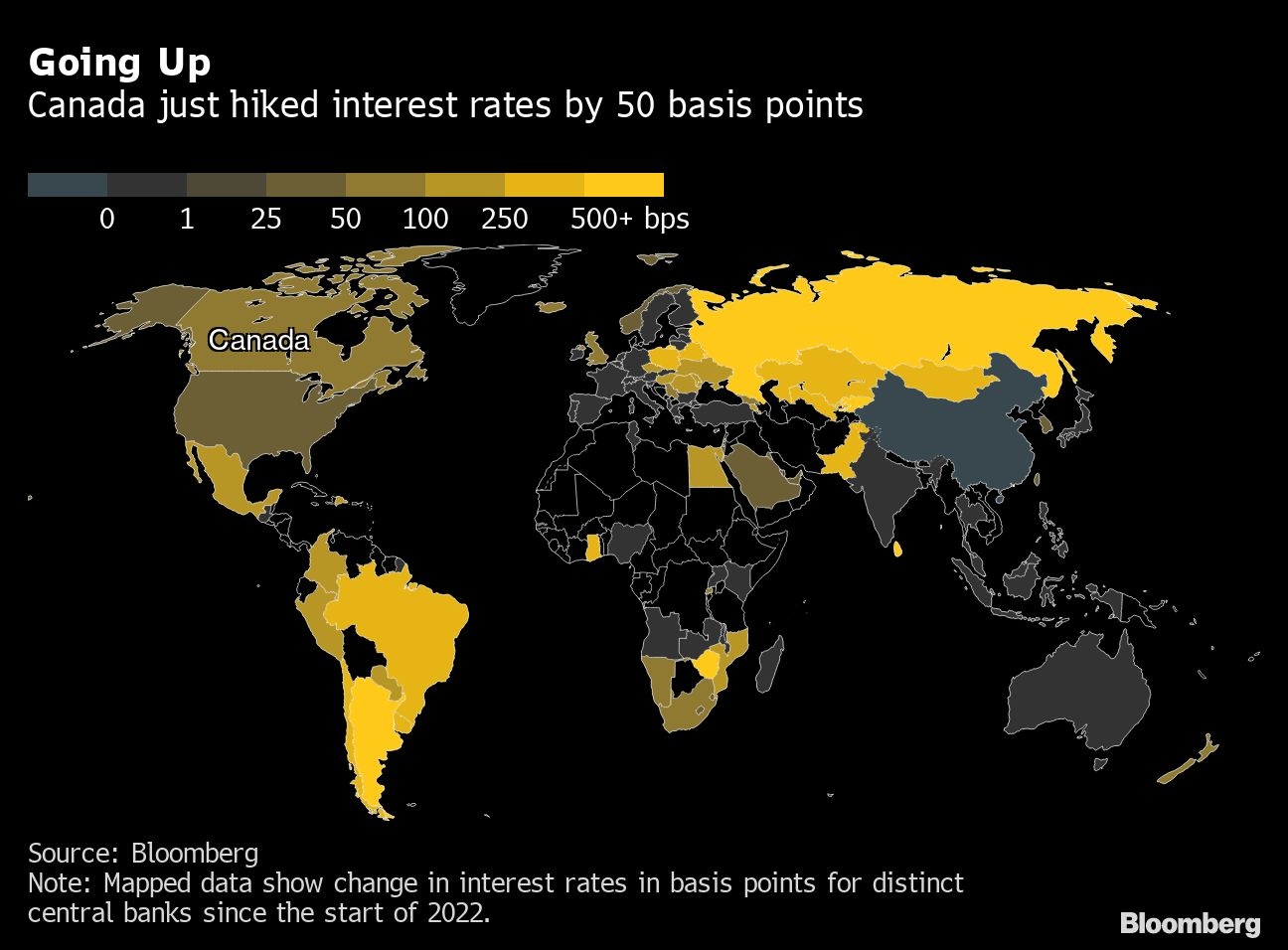 “This isn’t the last 50+ move and I’d expect another in June,” Derek Holt, head of capital markets economics at Bank of Nova Scotia, said by email.

Wednesday’s 50-basis-point hike was anticipated by 25 of 30 economists surveyed by Bloomberg News, with markets pricing in about a 70 per cent chance of an increase of that size. Investors are betting the central bank will continue hiking borrowing costs in coming months until the policy rate rises to as high as 3 per cent by this time next year.

The Bank of Canada also provided some details of its quantitative tightening plan on Wednesday. The bank no longer plans to replace federal bonds as they roll off their balance sheet starting April 25. Over the next 12 months, about a quarter of the net $350 billion (US$275 billion) in government debt acquired during the pandemic will mature, pushing up yields, and complementing the increase in the policy rate.

“The degree to which the start of quantitative tightening later in April will take the place of rate hikes is a question Governor Tiff Macklem did not clearly address in the press conference, reiterating language in the statement that QT would ‘complement’ rate hikes.”

Despite the hawkish policy statement, there are some relatively optimistic assumptions weaved throughout the decision. Supply is seen jumping next year to meet strong demand as COVID-19 containment measures are lifted and global disruptions ease.

Officials are also assuming Canada’s economy won’t be negatively impacted by the Ukraine crisis thanks to the nation’s commodities sector, while global inflationary pressures are seen eventually abating. If the latter assumption fails to materialize, the rate-hike path would need to be more aggressive.

On the other hand, the central bank also raised by 25 basis points its estimate for its neutral rate to around 2.5 per cent, which gives it more scope to hike.

The jumbo rate hike is the first by a Group of Seven central bank since the pandemic, but not the first on Wednesday.

New Zealand’s central bank lifted its official cash rate by half a percentage point to 1.5 per cent earlier in the day. A hawkish pivot is also expected in the U.S., where Chairman Jerome Powell and other policy makers have put a half-point hike on the table for the Federal Reserve’s meeting in May.