BoC not out of the woods yet: PIMCO's TIffany Wilding

The Bank of Canada delivered a fourth consecutive outsized interest-rate hike in a bid to slow the nation’s economy and drag inflation down from four-decade highs.

“Given the outlook for inflation, governing council still judges that the policy interest rate will need to rise further,” officials said in the statement.

The debate now moves to what the next steps will be for Macklem as the central bank tries to assess how high borrowing costs will need to rise to tackle sticky inflation. Markets are pricing in a strong chance of another half-percentage-point increase in October.

Yields on Canadian government two-year bonds rose slightly on the statement, up 1 basis point to 3.62 per cent at 10:09 a.m. in Toronto trading. The Canadian dollar was little changed, down 0.3 per cent to US$1.3183 per US dollar.

While dropping any references to “front-loading” increases, the statement suggests the Bank of Canada has shifted to thinking about smaller adjustments to policy, and is looking at where officials can start winding down the tightening campaign.

“As the effects of tighter monetary policy work through the economy, we will be assessing how much higher interest rates need to go to return inflation to target,” the bank said. 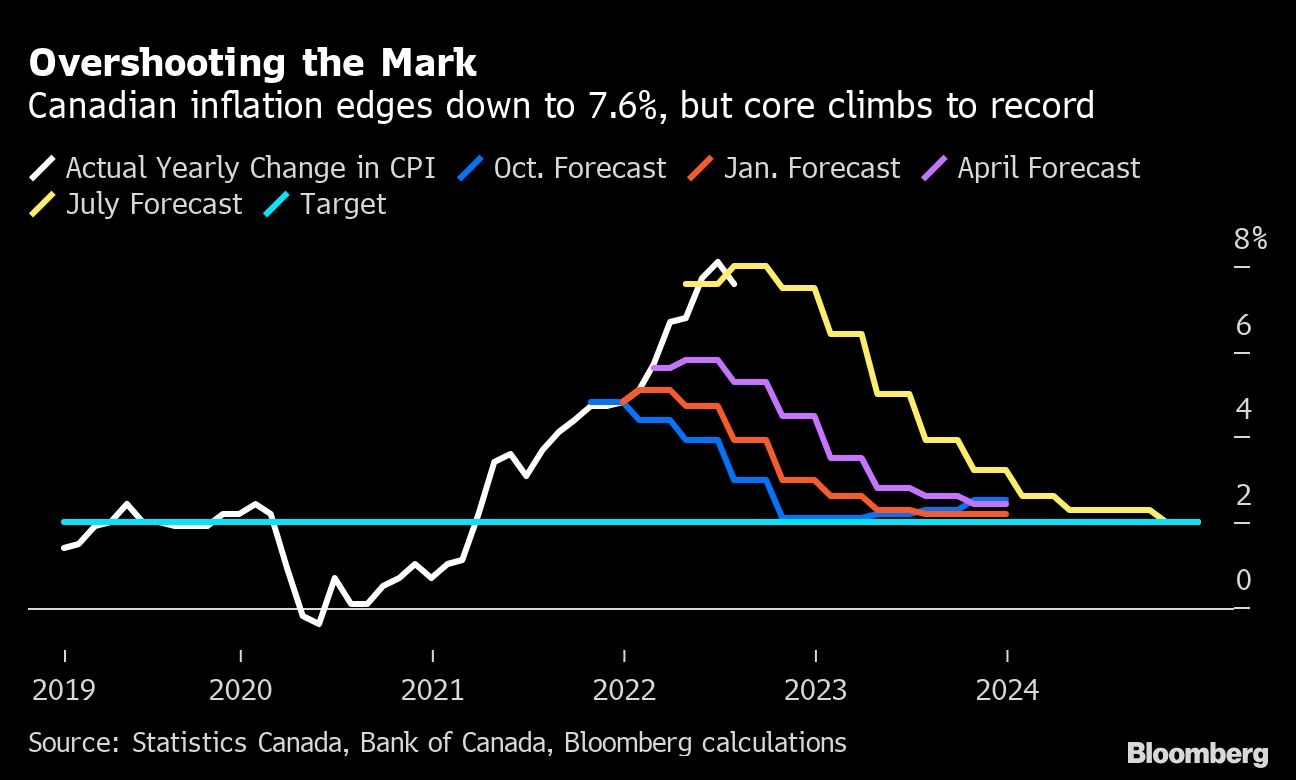 Most economists -- including all six major Canadian lenders -- expected the move.

The rate increase follows a surprise 100-basis-point hike in July, and half-point moves in April and June, making the current tightening effort one of the most aggressive ever. The overnight rate sat at an emergency pandemic low of 0.25 per cent until the beginning of March.

The central bank reiterated its commitment to bring consumer price gains back to the 2 per cent target and officials said they remain worried that persistently elevated inflation risks becoming entrenched in expectations.

“For those asking ‘Are we there yet?,’ the Bank of Canada answered ‘Not yet,’” Avery Shenfeld, chief economist at Canadian Imperial Bank of Commerce, said in a report to investors. The bank is signaling “today’s outsized rate hike still leaves rates shy of where it believes they will need to be to quell inflation.”

While noting headline inflation eased in July on a drop in gasoline prices, policy makers pointed to a broadening of price pressures and increasingly sticky core measures. Officials flagged slower than expected economic growth in the second quarter, but highlighted “very strong” indicators of domestic demand, including consumption and business investment.

Wednesday’s move will also cement Macklem’s reputation as one of the more hawkish central bankers among peers.

Monetary authorities around the world are slamming on the brakes to halt a post-pandemic surge of inflation. The Reserve Bank of Australia raised its policy rate by a half-percentage point Tuesday, and Banco Central de Chile stunned investors with a 100-basis-point move later in the day. The European Central Bank is poised to deliver a 75-basis-point hike on Thursday and the US Federal Reserve meets later this month, with an increase of at least 50 basis points expected.

The Bank of Canada’s decision was a statement-only affair with no new forecasts. Senior Deputy Governor Carolyn Rogers is scheduled to speak and hold a press conference Thursday, where she will likely shed more light on the bank’s thinking.