The Bank of Canada left its key interest rate at a historic low and maintained its current pace of bond purchases in a placeholder decision that should keep expectations intact for another reduction in emergency stimulus next month.

In a statement Wednesday from Ottawa, policy makers led by Governor Tiff Macklem held their overnight policy rate at 0.25 per cent. They also retained a pledge to not raise it until damage from the COVID-19 pandemic is fully repaired. The bank said it would continue to buy $3 billion (US$2.5 billion) a week of Canadian government bonds, while reiterating that the pace of asset purchases will decline as the recovery proceeds.

The tone of Wednesday’s decision was largely expected by analysts, who anticipate a gradual tapering of bond purchases. The central bank was among the first from advanced economies to shift to a less expansionary policy in April, when it accelerated the timetable for a possible interest-rate increase and pared back its bond purchases. Another taper is expected with the Bank of Canada’s decision on July 14.

The central bank is continuing asset purchases to “keep interest rates low across the yield curve,” policy makers said in the statement. “Decisions regarding adjustments to the pace of net bond purchases will be guided by Governing Council’s ongoing assessment of the strength and durability of the recovery.”

Nothing in the statement suggests that the central bank is pushing back against further gains in the Canadian dollar, even as it acknowledged the currency has climbed along with commodity prices. The loonie is up 5.5 per cent against the U.S. dollar this year.

“The Bank of Canada didn’t surprise us, leaving guidance unchanged for both policy rates and asset purchases. We expect further cuts to Government of Canada bond purchases in 2021, with the BoC entering the re-investment phase in early 2022. The central bank did tweak some of the language around its 2021 inflation outlook, but this is more of a simplification than a hawkish tilt.” -- Bloomberg Intelligence analyst Angelo Manolatos and rates strategist Ira F Jersey

The yield for the benchmark five-year government bond held steady at 0.86 per cent after the decision. The Canadian dollar pared gains after the statement’s release, trading at $1.2102 per U.S. dollar at 11:21 a.m.

In April, the Bank of Canada scaled back its weekly purchases of government debt by a quarter to $3 billion. Analysts anticipate that will come down to $2 billion per week in July, before eventually falling to a weekly pace of about $1 billion by early next year. That would bring the central bank to a neutral pace of purchases where holdings remain unchanged as securities mature.

“If incoming data aligns with the BoC’s expectations, we could see it reduce weekly bond buying again in July,” Josh Nye, an economist at Royal Bank of Canada, said by email.

Wednesday’s policy decision was a statement-only affair with no new forecasts. That’s one reason why economists believed there would be no policy change until the next meeting, when a fresh set of projections will be released. Waiting until July also gives the bank time to assess incoming economic data, as the nation emerges from a fresh wave of lockdowns.

Deputy Governor Tim Lane will give a speech on Thursday that could provide more insight into the policy deliberations.

The Bank of Canada has said it will bring its net purchases of bonds to zero before it starts to consider raising its policy rate, with swaps trading suggesting that investors are pricing in a 70 per cent chance of a hike over the next 12 months. Three rate hikes over the next two years are fully priced in, which would leave Canada with one of the highest policy rates among advanced economies. 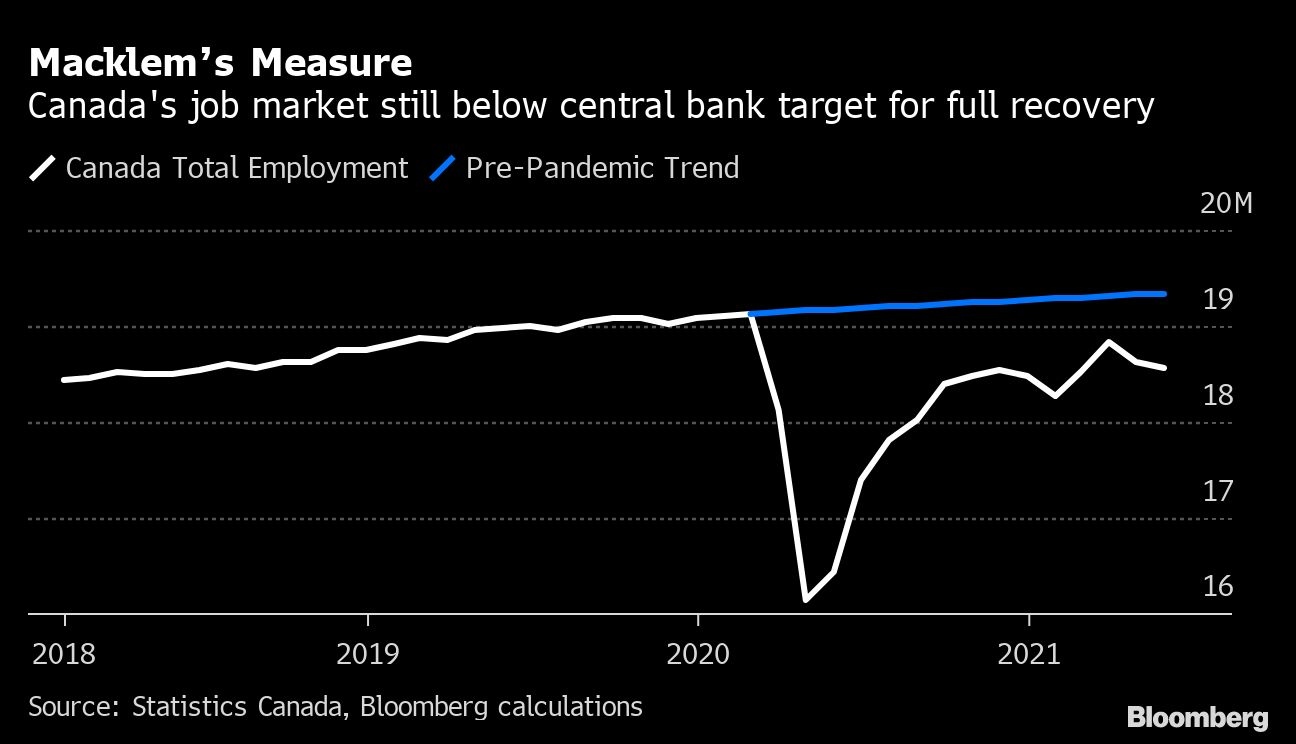 Risks remain. Since the last policy decision, Canada has been hit harder by winter COVID-19 restrictions than the Bank of Canada had expected. The economy went into reverse in April and May, losing 275,000 jobs -- and bringing Canada further away from employment levels that Macklem considers a full recovery.

Gross domestic product grew at an annualized rate of 5.6 per cent in the first quarter, below projections. But the Bank of Canada appeared to play down the miss, calling the expansion robust and characterizing the underlying details as indicating “rising confidence and resilient demand.”

Officials also said they expect the economy to recover quickly in coming months from a slowdown in the second quarter stemming from lockdowns over the winter. They cited strong growth in foreign demand and commodity prices as a tailwind for the economy.