We can rule out negative interest rates for now: BMO economist

The Bank of Canada stood pat on interest rates and reiterated its commitment to keep them at historic lows to support an economy buffeted by a second wave of COVID-19 cases.

In a decision Wednesday from Ottawa, policy makers led by Governor Tiff Macklem held the bank’s overnight rate at 0.25 per cent and reiterated a pledge to keep it there, probably until 2023. They said the bank would continue to buy Canadian government bonds worth at least $4 billion (US$3.1 billion) a week.

It was a steady-as-she-goes statement, with the central bank holding off from making any policy changes until there’s greater clarity on the evolution of the virus and the effectiveness of the vaccine. There was no indication the Bank of Canada plans to pare back stimulus any time soon, nor signs officials have become so worried they’re plotting additional measures.

“They’re happy with the amount of stimulus in the economy,” said Andrew Kelvin, senior Canada rates strategist at Toronto-Dominion Bank.

There’s been a series of offsetting developments in recent weeks to keep the central bank on the sidelines. 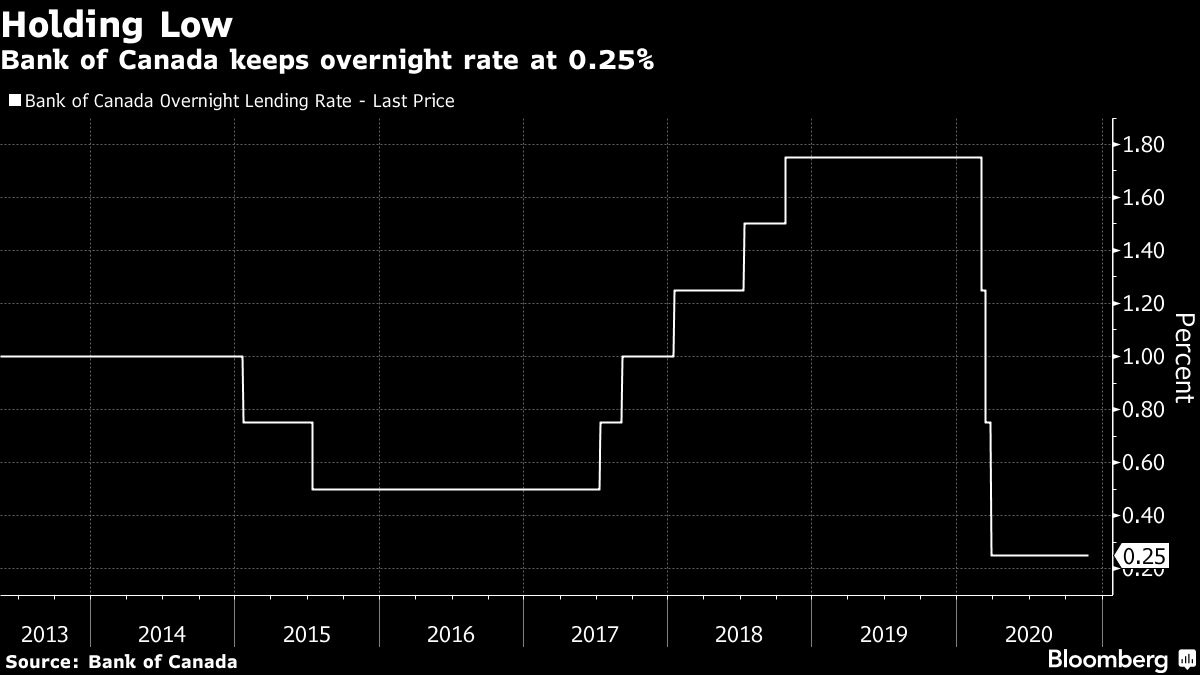 A second wave has forced officials in various hot spots -- including financial hub Toronto and the country’s main oil-producing province Alberta -- to impose stricter measures on businesses. That’s expected to weigh on growth early next year, the Bank of Canada said, and “contribute to a choppy trajectory until a vaccine is widely available.”

News of an effective vaccine, meanwhile, is “providing reassurance.” Canada’s public health authorities announced their approval of Pfizer Inc. and BioNTech SE’s coronavirus vaccine soon after the Bank of Canada’s decision. Prime Minister Justin Trudeau has said a majority of the country’s population could be vaccinated by September.

Trudeau’s decision to keep the spending taps open through the recovery also got a nod. Last month, Finance Minister Chrystia Freeland used her first mini-budget to project a deficit of $381.6 billion, or 17.5 per cent of gross domestic product, and pledged as much as $100 billion in additional stimulus over three years if needed.

“Recently announced measures should help maintain business and household incomes during this second wave of the pandemic and support the recovery,” the bank said.

“The Bank of Canada left all policy levers and forward guidance unchanged in its statement today. Though economic activity is deteriorating amid pandemic restrictions, the BoC nonetheless saw conditions evolving largely as anticipated at its last meeting in October.”
--Andrew Husby

On net, the rebound has unfolded largely as anticipated in October, when the central bank released its latest quarterly forecasts, officials said in the release.

Wednesday’s decision was a statement-only affair, without a press conference from Macklem or a new set of forecasts. Deputy Governor Paul Beaudry will give a speech Thursday providing insight into the bank’s thinking. It will release a new set of economic forecasts at its next monetary policy report in January.

The stand-pat tone was widely expected. The bank made more substantive changes in October, when it reduced the size of its bond purchases but pledged to buy more long-term securities. The central bank uses its bond purchases to dampen longer-term interest rates.

The bank again said it would continue its quantitative easing program until the recovery “is well underway,” adjusting it as required. On rates, officials said they would keep them at current levels until economic slack is absorbed and inflation is back to the 2 per cent target.

“In our October projection, this does not happen until into 2023,” the bank said.

While inflation had recently been running hotter than anticipated, policy makers suggested “considerable” economic slack is expected to weigh on price pressures for the foreseeable future.

Some analysts had been warning Macklem could be tempted to make a case for additional steps to buffer the economy from recent developments that threaten the recovery: a strengthening currency, increased restrictions as COVID-19 cases rise, and a pick-up in market interest rates. Yet, the Bank of Canada shied away from any such signals.

On recent strength in the Canadian currency, the bank said it’s due to a “broad-based decline” in the U.S. dollar, echoing language used in the October statement.

The loonie is hovering near its strongest level in more than two years. It moved higher briefly after Wednesday’s statement before paring gains, and was trading little changed at $1.2818 at 1:24 p.m. Toronto time.