BoC must address magnitude of GDP contraction given its optimistic July outlook: Strategist

The Bank of Canada expressed optimism about the prospects of a strong recovery later this year despite a run of weak data, keeping expectations intact for a resumption of bond tapering in October.

In a statement Wednesday from Ottawa, policy makers left their key interest rate at a historic low and maintained the current pace of bond purchases, but reiterated expectations that growth will accelerate in the second half of this year

The cautiously optimistic tone suggests policy makers led by Governor Tiff Macklem are unfazed by weaker than expected economic activity data last week that has cast some doubt over the pace of the recovery. The stand-pat decision was widely anticipated by analysts, many of whom expect the central bank to resume tapering as soon as next month.

The central bank held its benchmark overnight interest rate at 0.25 per cent and retained a pledge to not raise it until damage from the Covid-19 pandemic is fully repaired. The bank also said it would continue to buy $2 billion (US$1.5 billion) a week of Canadian government bonds, while reiterating that the pace of asset purchases will decline as the recovery proceeds.

“Decisions regarding future adjustments to the pace of net bond purchases will be guided by Governing Council’s ongoing assessment of the strength and durability of the recovery,” policy makers said in the statement. “We will continue to provide the appropriate degree of monetary policy stimulus to support the recovery and achieve the inflation objective.” 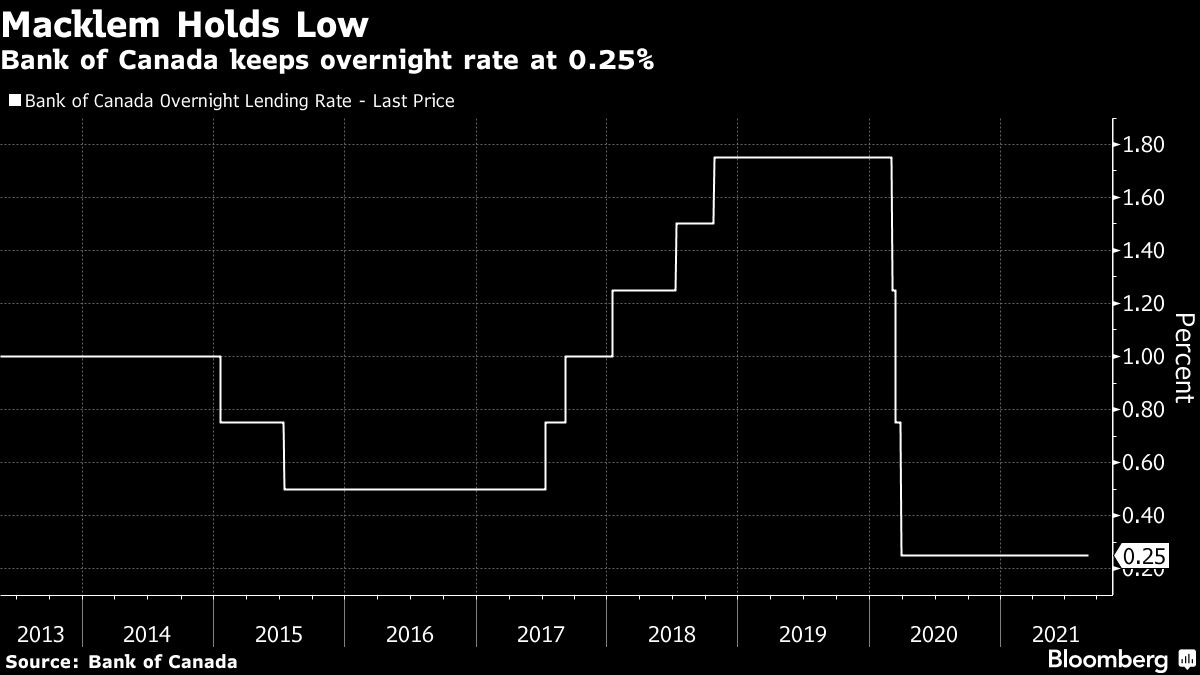 The Bank of Canada has been taking steps to gradually return to more normal policy, reducing its asset purchase program three times since the end of last year.

The policy decision was a statement-only affair with no new forecasts. Waiting until October to taper again gives the bank time to reassess incoming economic data on the summer months after the election ends. The Bank of Canada has also sought to tread carefully around the election campaign, avoiding any major changes that could become fodder for parties ahead of the Sept. 20 vote.

Wednesday’s statement comes amid a shock contraction in output. Gross domestic product dropped 1.1 per cent in the second quarter, the national statistics agency said last week, well below the 2.5 per cent expansion the bank forecast in July.

The bank acknowledged the recent string of weak data but continued to express belief that the economy would strengthen in second half of the year. Officials pointed to supply chain disruptions as a key factor in the contraction in second quarter output.

“We continue to expect the BoC will wrap up net QE purchases over coming meetings, but slow-play tightening compared to prior cycles. We still see initial liftoff in 1Q 2023, slightly later than markets and the consensus of economists, as the BoC aims at fuller recovery in the labor market.”

Policy makers continue to view recent high inflation readings as temporary. In July, annual consumer price gains hit 3.7 per cent, well above the Bank of Canada’s 1 per cent to 3 per cent control range.

The bank is “coming around to the idea that supply chain disruptions will keep inflation readings higher for longer, but this is a global phenomenon and isn’t derailing central bank’s plans as of yet,” Simon Harvey, a senior foreign exchange analyst at Monex Canada, said by email.

Analysts expect the Bank of Canada’s next big move will be another $1 billion tapering by no later than early next year. That would bring the central bank to about a neutral pace of purchases where holdings remain unchanged as securities mature.

The Bank of Canada has said it will bring net purchases of bonds to zero before it starts to consider raising its policy rate, with swaps trading suggesting that investors are pricing in a 100 per cent chance of a hike over the next 12 months. Three rate hikes over the next two years are fully priced in, which would leave Canada with the highest policy rate among Group of Seven economies.

On Thursday, Macklem will give a speech to the Quebec chamber of commerce on the end phase of the quantitative easing program.