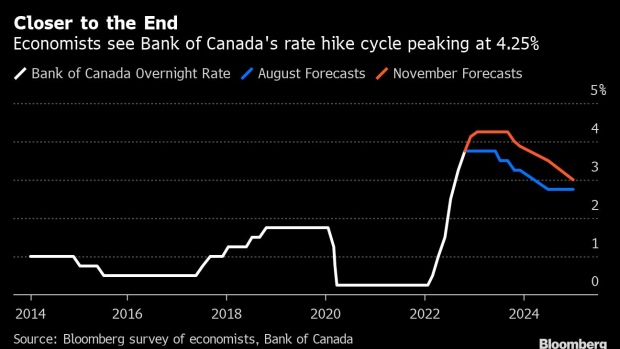 Tiff Macklem waits to speak before a Senate committee in Ottawa on Nov. 1. , Photographer: David Kawai/Bloomberg

(Bloomberg) -- The Bank of Canada is set to deliver a seventh consecutive increase to borrowing costs as officials begin winding down their forceful rate-hiking cycle.

Economists are split on the size of the change at Wednesday’s meeting, with a slim majority forecasting a 50-basis-point increase, according to a Bloomberg survey.

Markets aren’t as convinced, with swaps traders leaning toward a 25-basis-point adjustment.

Either scenario brings the Bank of Canada’s overnight rate to at least 4%, the highest since the early months of 2008.

Policymakers led by Governor Tiff Macklem are expected to reiterate that the hiking cycle — one of the most aggressive in the central bank’s history — is nearing an end, although they’ll likely stop short of explicitly signaling a pause.

The key question is how much additional tightening is needed to bring inflation to heel in an economy that is already feeling the bite of higher borrowing costs. With economic growth seen stalling in coming months, overtightening now could block the path to a so-called “soft landing” in Canada.

Overnight swaps traders are betting the Bank of Canada brings its benchmark to a least 4.25% before stopping, below expectations for the Federal Reserve, with US borrowing costs seen heading to 5% and perhaps even higher.

“It makes sense now to move down to a slower pace of rate hikes and be a bit more data dependent,” said Josh Nye, assistant chief economist at Royal Bank of Canada. He expects a 25-basis point increase on Wednesday and doesn’t anticipate any overt signal to pause.

The recent string of data is mixed. While the economy expanded by more than expected in the third quarter, underlying details showed consumption and domestic demand slowing sharply. The labor market remains strong, but Canada’s yield curve inversion hit its widest since the early 1990s this week, a global phenomenon that often precedes a recession.

Though headline inflation peaked in July, consumer prices still rose at a 6.9% yearly clip in October — far exceeding the Bank of Canada’s 2% target — and both underlying measures and wage growth remain stuck above 5%.

Some analysts see stronger economic activity since the bank’s last meeting as reason to stick with outsized rate increases.

“It would send the wrong message, and generally be a strange time, to further slow the pace of hikes,” Veronica Clark and Gisela Hoxha, economists at Citigroup Inc., said in a report to investors. They’re expecting a 50-basis-point hike.

Wednesday’s decision won’t include a new set of economics forecasts. However, a speech and press conference Thursday by Deputy Governor Sharon Kozicki may shed more light on the bank’s thinking.

Macklem and his officials have already raised the overnight rate to 3.75% from the emergency pandemic low of 0.25% that held until March. The Bank of Canada surprised markets and most economists at its last meeting by opting for a half-percentage-point hike, down from a 75-basis-point increase in September and a full-percentage-point jolt in July.

Most economists view Canada’s economy as more sensitive to higher rates than the US and say the Bank of Canada can comfortably let its benchmark diverge from the Fed’s by as much as 100 basis points.

Politically, Macklem and his officials are taking fire from all sides.

On the right, the Conservatives have targeted the central bank since the pandemic, alleging it became an “ATM” for Prime Minister Justin Trudeau’s deficit spending through its purchases of government bonds.

More recently, Macklem has faced attacks from the left. The labor-friendly New Democratic Party is calling for an end to steep rate hikes, warning that further tightening risks deep employment losses and a recession. And last month, the head of Canada’s largest private-sector union accused Macklem of waging a class war.

For his part, the governor has acknowledged the labor market faces a “difficult adjustment” as the central bank works to bring the supply of workers more in line with demand.

“This tightening phase will draw to a close,” Macklem told lawmakers two weeks ago. “We are getting closer, but we are not there yet.”