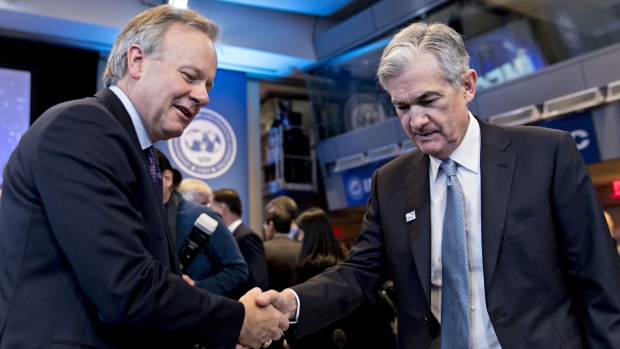 The Bank of Canada is likely to join the U.S. Federal Reserve with an interest rate cut this year to deal with the fallout from rising trade tensions, according to trading in the swaps market.

Investors are betting Canadian policy makers will follow an expected U.S. rate cut in September. The chances of a Bank of Canada match at the Oct. 30 meeting jumped above 50 per cent Tuesday, up from about 25 per cent last week, according to data compiled by Bloomberg. The market is implying 20 basis points of easing over the next six months. The odds of a cut soared after U.S. President Donald Trump threatened to impose tariffs on Mexican products to stem illegal immigration, raising concerns about the ratification of the revised North America Free Trade Agreement.

Traders are increasing their bets on a rate cut even as economic data signal the economy is showing signs of pulling out of a first-quarter slowdown. The median consensus of analysts expect that the benchmark rate will remain unchanged this year at 1.75 per cent.

“The data for Canada is unfolding in a manner about as expected, but the medium-term outlook has definitely been impacted by trade/tariff developments of late,” said Mark Chandler, head of fixed income research at Royal Bank of Canada, which sees the central bank on hold through 2020. “Most of the fear surrounds the potential impact on U.S. factory sector. Analysts have not fully incorporated this into their forecasts I believe because of a belief that the tariffs may yet be avoided.”

Federal Reserve Chairman Jerome Powell signaled Tuesday an openness to cut interest rates if necessary, pledging to keep a close watch on fallout from a deepening set of disputes between the U.S. and its largest trading partners. Investors have aggressively increased bets the Fed will cut interest rates this year after Trump widened ongoing trade tensions with the new Mexico threat.

In the U.S., swap traders assign an 89 per cent chance of the Fed cutting rates as soon as September, Bloomberg data show. Investors may get fresh signals on rates this weekend when finance ministers and central bankers from the Group of 20 economies meet in Japan.

“We should get more clarity on both Mexico and China, at the G-20,” said Chandler. If over the coming weeks there is “no improvement, you might see more analysts believing that rate cuts in the U.S. -and maybe Canada- are more likely.”

Bank of Canada Governor Stephen Poloz said as recently as last month he still believes interest rates are poised to continue rising once headwinds to growth dissipate. “The natural tendency is for interest rates to still go up a bit,” Poloz said in an interview on BNN Bloomberg, adding he didn't yet know the size or the timing of any increases