The Bank of Canada is set to deliver a super-sized interest rate hike this week, as it accelerates efforts to withdraw stimulus from an overheated economy and rein in soaring inflation.

Governor Tiff Macklem is expected to raise the central bank’s policy rate by three quarters of a percentage point on Wednesday, to 2.25 per cent -- the largest increase since 1998. That follows back-to-back half-percentage-point hikes in April and June, making the current tightening effort one of the most aggressive ever.

Though initially slow to respond to the cost-of-living crisis, Canada’s central bank is now scrambling to stamp consumer price gains down from a four-decade high and shore up public confidence that it’s serious about doing so -- risking a recession in the process. Its biggest worry is that inflation becomes entrenched in wage and price expectations, making it increasingly difficult to bring under control. 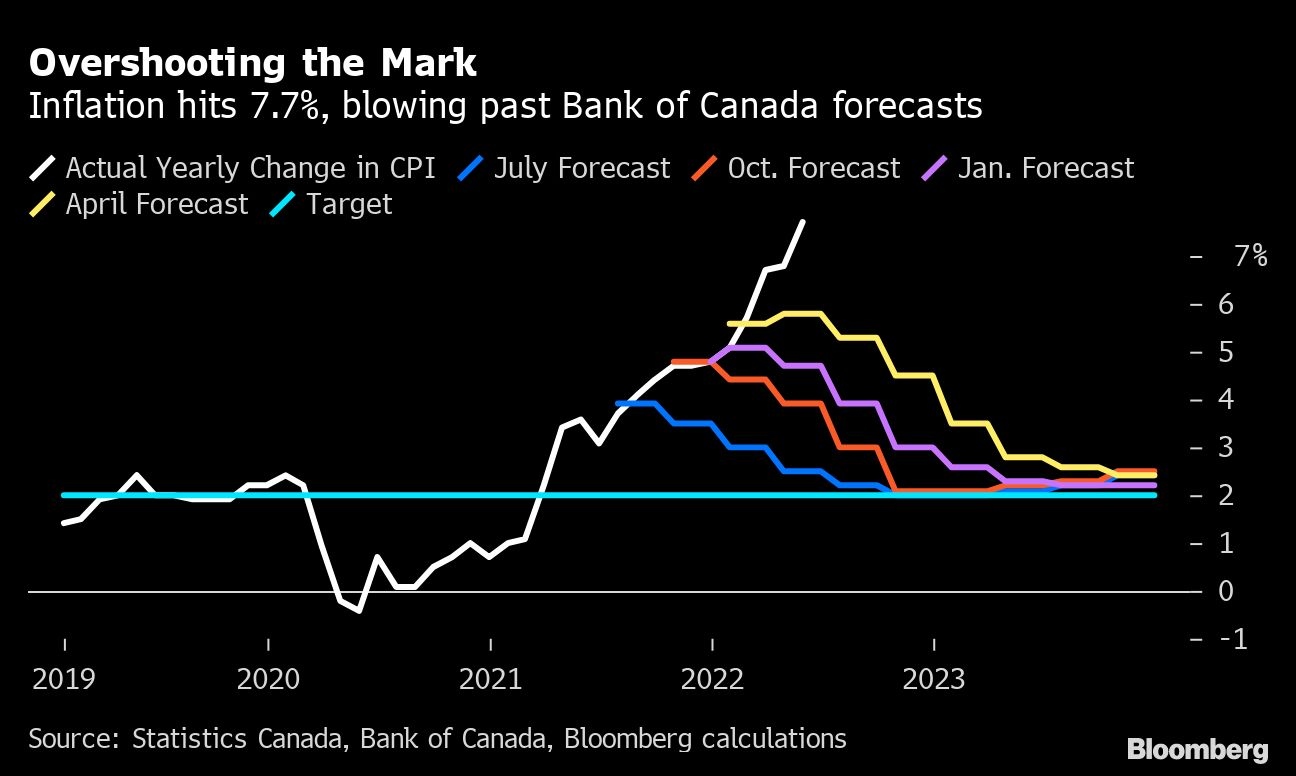 “You’re only hiking by 75 basis points if you are behind the curve,” Andrew Kelvin, chief Canada strategist at Toronto-Dominion Bank, said by phone. Macklem and his officials need “to be talking tough and doing everything they can to demonstrate their commitment to bringing inflation lower.”

Policy makers will also outline new forecasts for growth and inflation at the decision, due at 10 a.m. in Ottawa, and will likely signal more tightening is needed in coming months. Macklem speaks to reporters an hour later, however the bank said Tuesday the governor will appear by video link because of a recent COVID-19 infection.

Central banks around the world have pivoted to more aggressive hiking paths as inflation pressures continue to surprise. The Federal Reserve delivered a 75-basis-point hike last month, paving the way for the Bank of Canada to do the same this week.

Overnight swap traders see Macklem taking rates to 3.5 per cent or higher by the end of this year, a level not seen since before the Great Recession. That makes the Bank of Canada one of the most hawkish central banks among industrialized countries, reflecting a relatively stronger economic outlook as the resource-rich nation benefits from high commodity prices.

Data continue to point to an economy struggling with capacity limits and in need of cooling, despite being already four months into the hiking cycle.

Wage pressures are mounting and the unemployment rate is hitting record lows. The Bank of Canada’s latest surveys of businesses and households show inflation expectations continue to intensify.

The numbers, meanwhile, are likely to get worse before improving. The next annual inflation reading due next week may even exceed 8 per cent, after hitting a yearly clip 7.7 per cent in May, though most economists believe it’s likely near its peak.

The consensus is that growth will slow over the next year, but remain resilient as Canada’s economic expansion benefits from strong momentum coming out of the pandemic.

“Given record-low unemployment in Canada and better momentum than we expected for job gains in the US in June, we now see another 75-bp move at the September meeting. That would take the policy rate to the top end of the BoC’s current estimate of neutral -- a range of 2 per cent-3 per cent.”

While the Bank of Canada will again revise its inflation forecasts higher, and cut its growth projections, officials are likely to maintain their optimism. As a base case, they will likely predict inflation falling below 3 per cent within a couple of years, with the expansion hobbled but intact. They may, however, acknowledge the growing risk of a recession.

But even economists predicting a contraction see only a moderate one. Royal Bank of Canada forecast last week the economy will shrink in the two middle quarters of 2023 -- but barely.

Markets, meanwhile, see the emergency over by this time next year, at which time investors are betting Macklem will start to consider rate cuts.

“We continue to believe inflation is close to its peak, but won’t shift to more sustainable levels until demand slows more significantly,” economists Nathan Janzen and Claire Fan wrote in a July 8 report to investors. “Once that happens, expect the BoC and other central banks to again push rates lower -- though this likely won’t play out until the economy undergoes a modest contraction next year.”

Some worry hiking too much is now a real concern.

Canada’s households are among the most indebted among advanced economies, and would be more likely to pare back spending in the face of rate increases. The withdrawal of stimulus is already hitting home sales, which have fallen dramatically in the country’s largest cities as mortgage rates climb.

That means the Bank of Canada’s path to wrestling down inflation may be easier than in the US, but the risks of a major contraction greater.

“Debt makes it easier for Macklem to bring inflation lower, but it’s a much narrower target to hit before moving into over-tightening,” Kelvin said. “It’s a real fine line between hard landing and soft landing.”