The Bank of Canada is poised to become the first in the Group of Seven to hike interest rates by a half-percentage point as it moves more aggressively to wrestle inflation down from a three-decade high.

Governor Tiff Macklem is expected to raise the central bank’s policy rate to 1 per cent on Wednesday, followed by a series of additional hikes that markets are betting will bring it as high as 3 per cent by this time next year. The Bank of Canada is also likely to use the decision, due at 10 a.m. in Ottawa, to effectively stop purchases of government bonds as it begins unwinding its balance sheet.

Those moves represent one of the most forceful tightening campaigns ever by the Bank of Canada, a tacit recognition officials have been too complacent on inflation and need to quickly exit from ultra-loose monetary policy. It will be a major test for an economy with one of the highest debt burdens and most expensive housing markets in the world.

“They’ve been happy to be behind the curve and assume that inflation was going to abate on its own,” Jimmy Jean, chief economist at Desjardins Securities Inc., said by email. “Now they want to get policy back to neutral as fast as possible.”

The challenges are not unlike those at other central banks, including the Federal Reserve, that have pivoted to a more hawkish stance. Chairman Jerome Powell and other U.S. policymakers have put a half-point hike on the table for the Fed’s meeting in May.

Trading in overnight swaps, however, suggests the Bank of Canada will be near the head of the advanced-economy pack in raising rates, buffered in part by surging commodity prices for the resource-rich nation. 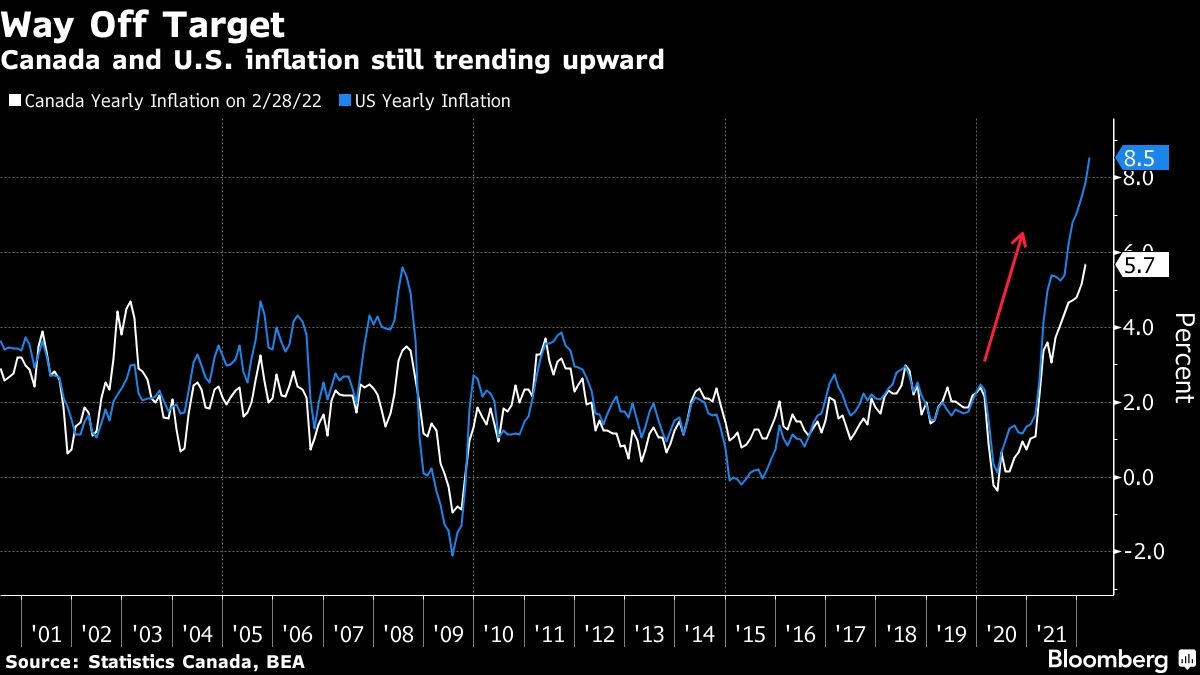 Wednesday’s decision will include new quarterly forecasts that illustrate the urgency of Macklem’s pivot. The Bank of Canada -- once again -- will revise its inflation forecasts higher amid stronger and more persistent price pressures, with Russia’s invasion of Ukraine only worsening the problem.

In January, the central bank predicted inflation would average 5.1 per cent in the first quarter, before slowing down to 3 per cent by the end of this year. Instead inflation is on track to exceed 6 per cent in March, and remain above 4 per cent through most of 2022 -- well above the Bank of Canada’s 2 per cent target.

Macklem and his officials will probably push out projections for a return to target into 2024.

In a survey of economists by Bloomberg News, 25 of 30 predicted the Bank of Canada will hike by half a percentage point -- the first 50-basis-point increase since 2000. The other five analysts see a 25-basis-point increase. Markets, meanwhile, are signaling a two-thirds chance of an outsized move on Wednesday.

“The BoC is set to flex its hawkish talons April 13, raising rates by 50 bps and announcing balance-sheet runoff. A higher inflation outlook, record-low unemployment in March and a likely 50-bps hike from the Federal Reserve in May give the BoC cover to act.”

The Bank of Canada began its hiking cycle last month, raising the policy rate to 0.5 per cent from the emergency low of 0.25 per cent. Swaps trading suggests it will peak at 3 per cent by this time next year.

The last time the central bank increased rates that much and that fast was in 1997 and 1998, when the Bank of Canada raised its policy rate by 2.75 percentage points over 14 months to stem a slide in the currency. There was also an aggressive hiking cycle in 1994.

What’s unprecedented this time is the effort to dramatically shrink its balance sheet. While the central bank stopped growing its holdings of Canadian government bonds in October, it’s been keeping them at elevated levels by replenishing maturing debt.

Macklem is expected to end this “reinvestment” phase on Wednesday, allowing bonds to roll off the balance sheet as they mature -- a process known as quantitative tightening. Over the next 12 months, about a quarter of the net $350 billion (US$275 billion) in government debt acquired during the pandemic will mature. 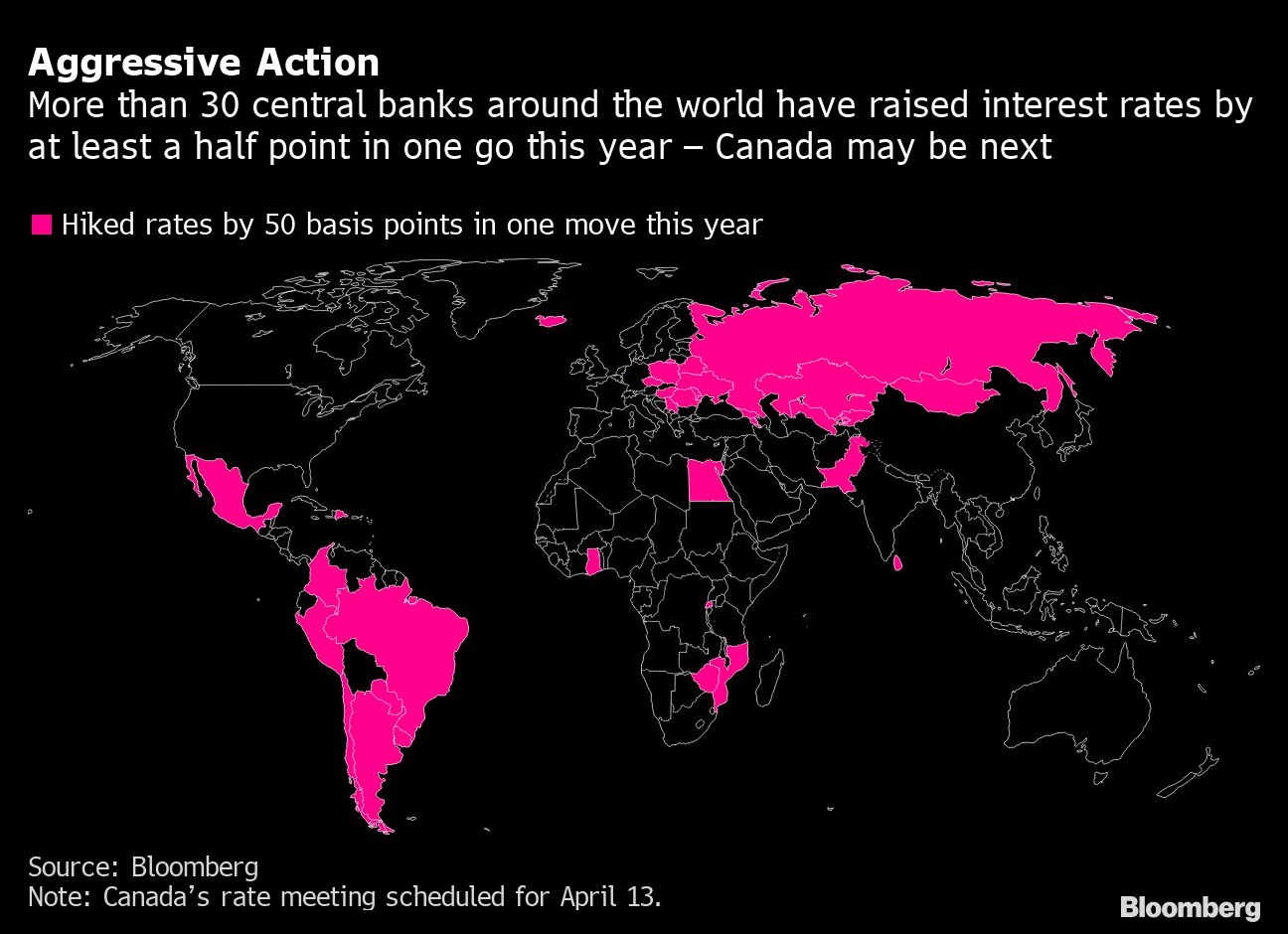 The increase in the bond supply resulting from the Bank of Canada’s withdrawal from the market will likely push up yields, and in turn borrowing costs. “Quantitative tightening will contribute to the upward pressure on interest rates,” Benjamin Reitzes, head of Canadian rates and macro strategy at Bank of Montreal, said by email.

Macklem’s challenge will be to bring inflation back under control without overly stunting growth -- or worse triggering a recession -- in Canada’s debt-laden economy.

The central bank appears optimistic it can engineer a soft landing.

In a speech last month, Deputy Governor Sharon Kozicki said officials plan to “act forcefully” to quell inflation. She added that households are in better shape today than at the start of the last hiking cycle, which began in 2017 and reached a terminal rate of 1.75 per cent.

Others aren’t so sure the Bank of Canada will wind up hiking as aggressively as markets expect.

“Housing, and a high level of household indebtedness in particular, is the kryptonite” of the economy, Eric Lascelles, chief economist of RBC Global Asset Management Inc., said in a phone interview. “I’d be surprised if we saw policy rates get to 3 per cent,” as anything beyond “would begin to do some serious damage in a high-debt world.”