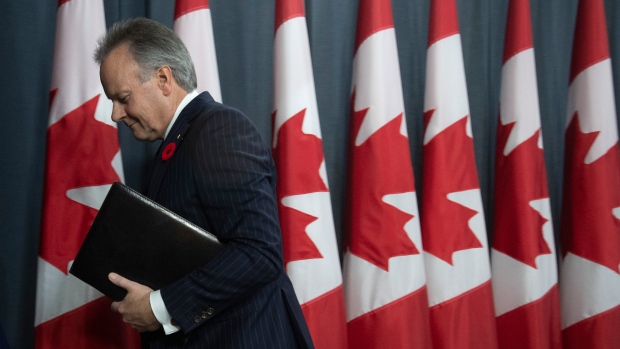 The Bank of Canada restated its authority to buy corporate and municipal bonds, according to a public notice by the central bank last week.

Governor Stephen Poloz issued a restatement of the Bank of Canada’s policy in the Canada Gazette on March 13 on policies for purchasing securities, that includes the right to buy the debt of companies and municipalities when it is “addressing a situation of financial system stress that could have material macroeconomic consequences.”

The central bank may be forced to begin a quantitative easing program for the first time in history, analysts say, as the country contends with a dramatic rise in unemployment.

Bank economists now expect the Canadian economy to shrink between 10% and 24% on an annualized basis, a recession deeper than the worst of the 2008-09 financial crisis. Many see it as inevitable that Poloz and his governing council will cut the overnight rate to near zero, then start rummaging deeper into their toolbox.

“We think the bank will be forced to adopt QE and that they’ll look to ultimately buy up to C$150 billion in securities,” said TD Securities macro strategist Robert Both in an email. “We think it is a question of when and not if.”

Quantitative easing, which sees central banks buy government bonds as part of an effort to keep borrowing costs low for a prolonged period of time, would be a first for the Bank of Canada, which didn’t follow its peers to such lengths during the 2008 crisis.

The global outlook is deteriorating rapidly, forcing central banks into new territory. The Federal Reserve said Monday it will buy unlimited amounts of Treasury bonds and mortgage-backed securities to suppress borrowing costs and ease the flow of credit amid a historic economic shock.

The Bank of Canada’s governing council often distances itself from monetary policy decisions south of the border. But the Fed’s move opens the door to a more robust response from Canadian policy makers.

“The Bank of Canada doesn’t like being pushed by the Fed, but now it’s global,” said Benjamin Reitzes, an economist at Bank of Montreal, which sees an 80% chance the central bank will need to start quantitative easing.

“The question is why they’d wait until April -- given the broad shutdowns it’s already clear that conditions have deteriorated sharply,” he said.

While Poloz said last week that other options are on the table, he made it clear the measures the bank has taken so far -- including upping the purchases of mortgage-backed securities -- don’t constitute quantitative easing.

“The programs the bank has introduced are very important in unlocking funding markets,” Ian Pollick, global head of non-equity market research at Canadian Imperial Bank of Commerce. “The problem is, liquidity is so distressed that they are not working as planned. They need to bring out the Canadian bazooka,” adding that he’s certain the central bank will “imminently” launch QE.