The best social program is a strong economy with high demand for workers: CIBC's Mendes

The Bank of Canada’s increased focus on the jobs market means investors will pay extra attention to Friday’s labor report, as they search for clues on when policy makers will start pulling back on stimulus.

Central bank officials chose to highlight employment weakness on Wednesday in a statement that provided little sign they’re ready to pare back ultra-easy monetary policy. That’s despite a recent string of data showing surprising strength in the economy.

Statistics Canada is expected to report Friday morning that the nation added 75,000 jobs in February, according to the median estimates in a Bloomberg survey of economists. That would mark the first gain in three months, but would leave the jobless rate at 9.2 per cent with employment still down nearly by 800,000 from pre-pandemic levels.

“It’s clear that the labor market will play a larger role than it has in the past and the bank won’t be as focused on the GDP-driven measures of the output gap,” Benjamin Reitzes, a Canadian rates and macro strategist at BMO Capital Markets, said by phone. 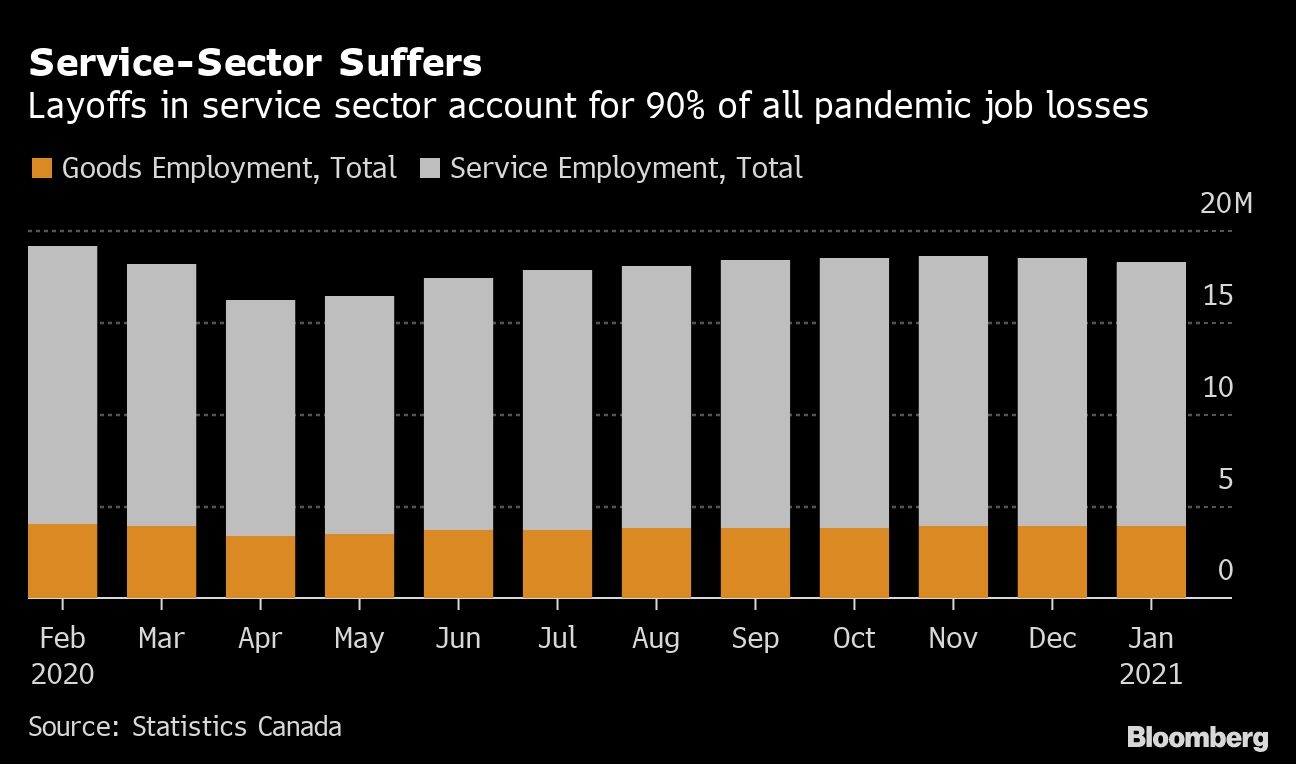 The Bank of Canada has pledged not raise borrowing costs before damage from the pandemic is fully repaired and inflation returns sustainably to its 2 per cent target. Yet, as output recovers more quickly than expected, the bank is beginning to put more weight on labor-market indicators that could lag activity measures like gross domestic product.

In a speech last month, Governor Tiff Macklem outlined a number of employment trends that will probably necessitate policy remain accommodative for a prolonged period, including the need to facilitate structural changes in the workforce. While the Bank of Canada doesn’t have an employment mandate like the Federal Reserve, Macklem’s comments were seen as a signal he plans to test limits of the nation’s jobs market.

An increasing focus on labor also brings the Bank of Canada’s policy narrative into line with Prime Minister Justin Trudeau’s government, which is poised to announce in coming weeks a new deficit-funded job-creation program on the premise there is too much slack in the market.

As the BoC mulls changes to its monetary policy framework this year, we expect this emphasis on downside deviations in labor market indicators to gain in importance, much like it has at the Federal Reserve.
-- Andrew Husby, economist

On Wednesday, the Bank of Canada highlighted how women, youth and lower-waged workers have been disproportionately affected by the downturn. But a full recovery for those cohorts -- who typically work in service-sector jobs -- will be difficult until a vaccine is widely available.

“When it comes to the accommodation and food services, we are not out of the woods yet and it’s hard to see how we will be without the pandemic ending,” Brendon Bernard, an economist at job-posting firm Indeed Canada, said by phone. “For other areas of the economy, the current situation does look strong.”

Indeed’s listings recovered to their pre-Covid levels for the first time last month, a sign hiring is ramping up as vaccine rollouts accelerate. But again, the increased appetite for workers is not evenly-balanced with growth strong in postings for software development and construction, while weak in virus-exposed sectors like food preparation and hospitality.