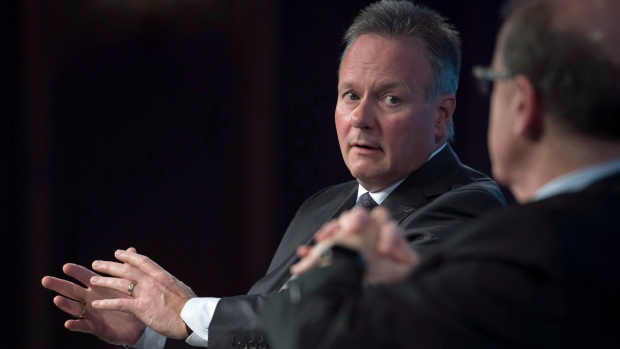 TORONTO -- Bank of Canada governor Stephen Poloz says it's too soon for the central bank to factor Donald Trump's election win into its decision making.

"I'm of course aware that a number of things were said during this campaign, but we're not in a position to take them on board or build them into our thinking until they actually occur," Poloz said during a question-and-answer period in Toronto Monday night.

"That's standard practice for us."

Poloz said that although Canada conducts its monetary policy independently of what is occurring south of the border, the central bank will factor in the impact of rising bond yields.

Global bond yields have been creeping higher on expectations that the U.S. president-elect will boost infrastructure spending, sending inflation higher.

"Of course ours have crept upwards along with global bond yields, and that's something we have to build in to our calculus as we go forward," Poloz said following his speech to the C.D. Howe Institute.

Poloz also reiterated his view that the divergence between Canadian and U.S. monetary policy is likely to grow.

"I gave a speech at the very beginning of the year saying that we had all of the ingredients of a divergence in monetary policies, and I think that those conditions remain intact," Poloz said.

"That story is based on the fact that we are still dealing with the aftermath of the oil price shock. In the U.S. economy that shock actually is a net positive for the U.S. economy."

He also noted that it would take a "shock" to the economy -- one that would jeopardize the bank's ability to meet its inflation target in a reasonable time frame -- for the central bank to consider more economic stimulus.

During his speech, Poloz emphasized the importance of the service sector as the Canadian economy continues to recover from the global financial crisis and the more recent downturn in oil and other commodity prices.

Poloz said there will always be demand for Canadian resources, but it is the service sector that is growing.

"Since the onset of the global financial crisis, growth in Canada's service sector has been stronger on average than in the goods sector," he said.

"Most of the employment growth seen in Canada since late 2014 has been in service industries that pay above-average wages, helping to support national income."

The Canadian economy has struggled since the financial crisis in 2008-09 and the more recent downturn in commodity prices. However, while growth in the goods producing sector has slowed, the service sector has continued to expand steadily.

More than 80 per cent of working Canadians are employed in services, while less than 20 per cent produce goods.

Poloz noted that the loss in export capacity before and after the financial crisis combined with the recent drop in resource prices created an $80-billion to $90-billion hole in the Canadian economy.

"It is natural to wonder: What will replace the economic losses due to these shocks," he said.

Poloz said that since January 2001, about 30 jobs have been created in the service sector for every job lost in the goods producing sector and he dismissed the notion that service jobs are generally low-skill and low-paying.

He added that while the average wage in the service sector is lower than in the goods producing sector, wages vary depending on the industry within the sector.

With files from Craig Wong