Probability of a recession just went up: Ed Devlin

The Bank of Canada hiked interest rates by a full percentage point, a surprise move that supercharges efforts to withdraw stimulus amid fears four-decade-high inflation is becoming entrenched.

Governor Tiff Macklem raised the central bank’s policy rate to 2.5 per cent in a decision announced Wednesday in Ottawa that warned of more hikes to come. The 100-basis-point move is the largest increase since 1998. Markets and economists were anticipating 75 basis points.

The unexpected monetary jolt illustrates the extent to which officials are spooked by soaring inflation, electing to take decisive action even at the risk of causing severe economic pain. They cited worries that persistent inflation creates a vicious cycle of wage gains and price increases that is difficult to bring under control.

“With the economy clearly in excess demand, inflation high and broadening, and more businesses and consumers expecting high inflation to persist for longer, the Governing Council decided to front-load the path to higher interest rates,” officials said in the policy statement.

Investors ramped up bets that front-loading also means rates will plateau higher than previously expected. Overnight swaps are suggesting Macklem will hike the benchmark to 3.75 per cent by the end of this year, up from 3.5 per cent before the decision. 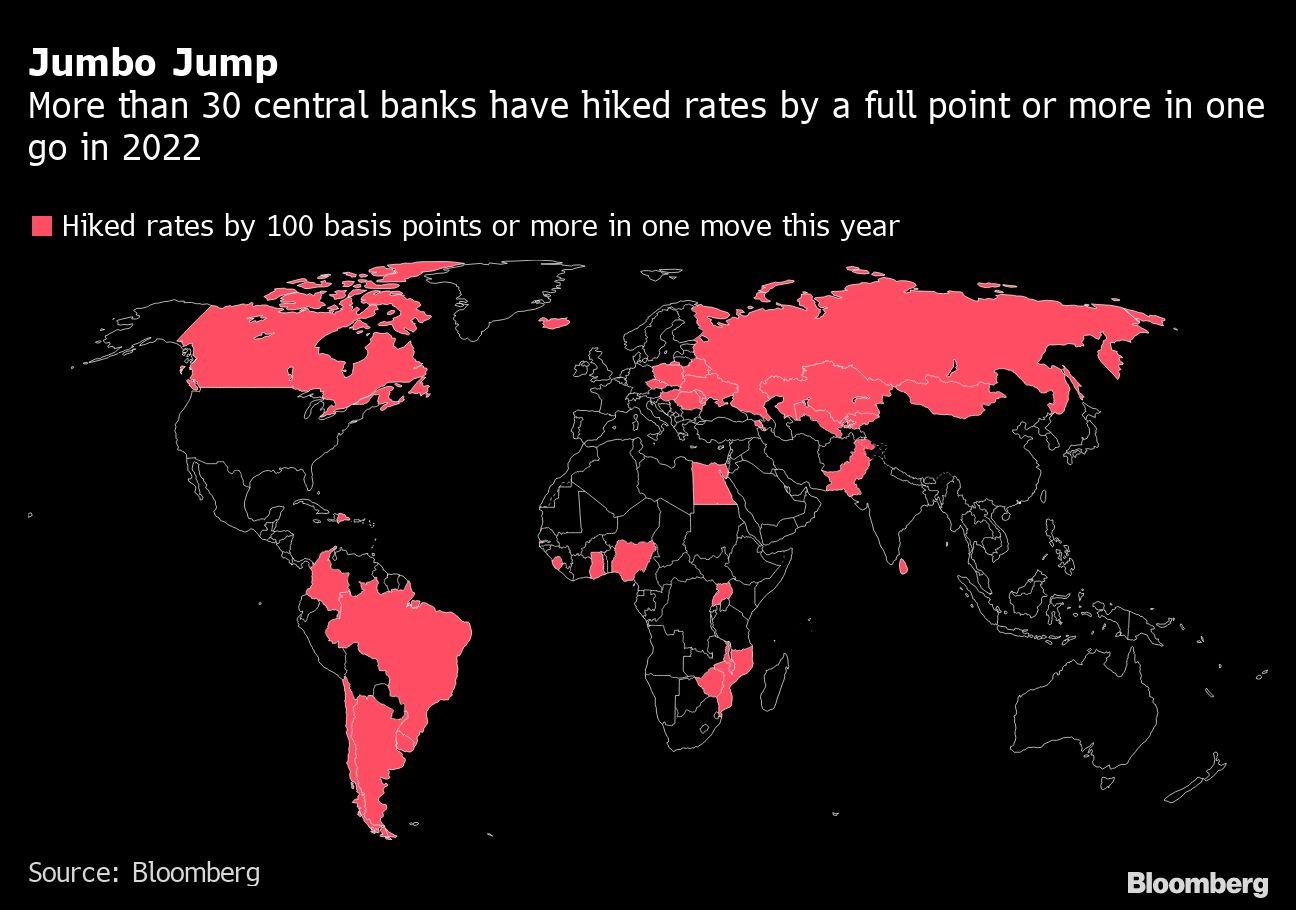 Still, policy makers are indicating they believe they can limit economic damage in the long run by reducing the need to chase escalating inflation expectations in the future.

In his opening statement to reporters at a press conference, Macklem said the objective is to achieve a soft landing. “By front-loading interest rate increases now, we are trying to avoid the need for ever higher interest rates down the road,” he said.

“This argues for getting our policy rate quickly to the top end,” Macklem said, adding that he believes that’s “slightly” above the neutral range, which the central bank estimates at between 2 per cent and 3 per cent. Neutral is a policy setting where borrowing costs are neither stimulative nor constrictive.

Mark Carpani, head of fixed income at Ridgewood Capital Asset Management Inc. in Toronto, said by email Macklem’s move was “bold and the right call.” He added he was “impressed they went above market expectations.”

To explain the aggressive hike, policy makers cited an economy “clearly in excess demand,” high and broadening consumer price gains and growing inflation expectations. Officials said they expect to continue raising rates further and will be “resolute” on bringing inflation back to target.

“The BoC presented its surprise 100-basis-point hike as a front-loading of higher rates, but the move suggests the endpoint of the hiking cycle will be higher than markets expect.”

The Bank of Canada’s 100-basis-point increase follows consecutive half-percentage-point hikes in April and June, making the current tightening effort one of the most aggressive ever. Macklem is also one of the more hawkish among peers, in a world where a number of central banks are pivoting to more aggressive hiking paths as inflation pressures continue to surprise.

The Federal Reserve delivered a 75-basis-point hike last month, and is poised for another big hike later this month after the Labor Department reported earlier Wednesday that US inflation quickened to 9.1 per cent in June.

The rate hike and US inflation reading “was like a double shot of espresso this morning,” Earl Davis, head of fixed income and money markets at BMO Global Asset Management, told BNN Bloomberg.

In the accompanying monetary policy report, Bank of Canada officials again raised their near-term forecasts for inflation, seeing price pressures running at around 8 per cent in the middle quarters of this year. Inflation will drop to 7.5 per cent by the end of this year, and won’t return to the 2 per cent target until the end of 2024.

Policy makers also slashed their outlook for the Canadian economy. They now see gross domestic product expanding 3.5 per cent this year and 1.8 per cent in 2023, down from 4.2 per cent and 3.2 per cent respectively, as global growth moderates and tighter monetary policy impacts activity.

The bank added analysis of a new risk scenario, in which a “self-reinforcing wage hike and price spiral” could ensue, saying that situation becomes more likely the longer inflation remains “well above” their 2 per cent target.

In an appendix to the report, the bank acknowledged mistakes in forecasting inflation over the last year. It primarily blamed the errors on global factors, but also cited domestic housing costs.

The bank said real-estate activity has already weakened substantially from what it described as an “unsustainable pace” during the pandemic. It expects both housing transactions and prices to decline into 2023 as rates rise.