Bank of Canada holds key interest rate at 0.25 per cent

The Bank of Canada pledged for the first time to keep interest rates at historically low levels for years to come to help spur the nation’s economic recovery.

At a decision Wednesday, the central bank left its overnight rate at 0.25 per cent, what policy makers led by Governor Tiff Macklem consider the lowest it can go. They also promised to keep the benchmark there until unemployment falls closer to pre-pandemic levels and inflation returns sustainably to their 2 per cent target. That would suggest rates won’t rise until after 2022, based on the bank’s new quarterly forecasts.

The move is the strongest commitment yet by the central bank that it will do whatever it takes to help Canada emerge from the coronavirus pandemic. Calling the hole left in the economy by COVID-19 the steepest and deepest downturn since the Great Depression, policy makers hope the certainty of low interest rates will spur households and businesses to borrow and spend.

“Our message to Canadians is that interest rates are very low and they are going to be there for a long time,” Macklem told reporters after the policy statement. “We have been unusually clear about the future path of interest rates.”

How does the Bank of Canada’s guidance on low rates impact your view of debt?

Macklem’s pledge, referred to as forward guidance by economists, specifically commits the Bank of Canada not to raise its policy rate “until economic slack is absorbed so that the 2 per cent inflation target is sustainably achieved.” That likely means the unemployment rate, which is also now at historically high levels of above 12 per cent, would need to fall sharply. Companies, many of which have had to close or shut down partially because of pandemic lockdowns, also would need to be operating at near full capacity. It’s a scenario the central bank isn’t anticipating will happen before at least 2023.

The governor didn’t give a specific time period when that would happen, only to say that there needs to be evidence slack has been absorbed, adding that would be a “long ways off.” In its forecasts, the central bank projects inflation to average 0.6 per cent in 2020, 1.2 per cent in 2021 and 1.7 per cent in 2022. The Bank of Canada is mandated to target inflation at around 2 per cent.

While Canadians don’t have access to the central bank’s 0.25 per cent policy rate, the benchmark does dictate what households and businesses pay on loans. Interest rates that commercial banks give to their prime customers are typically just over 2 percentage points above the policy rate.

The crisis has already taken the bank into uncharted waters. It was forced to cut the benchmark rate to near zero, injected hundreds of billions in cash into financial markets and made the first-ever foray into large-scale asset purchases of government bonds. 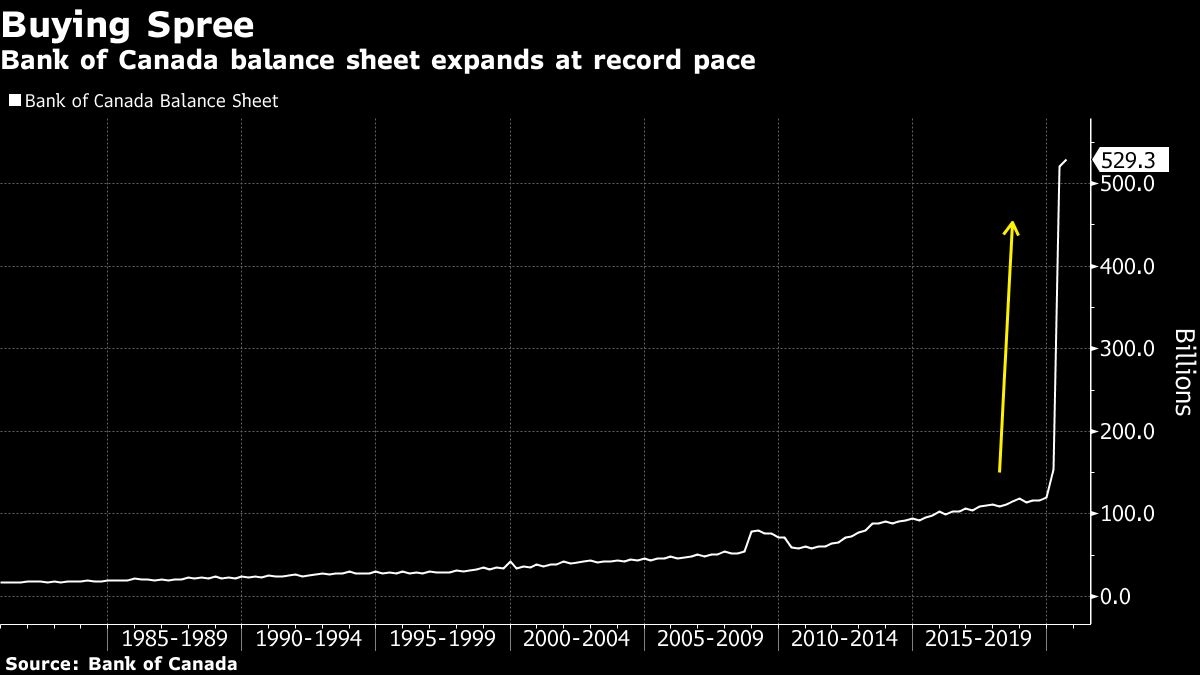 In its policy statement, the bank reiterated its commitment to continue buying at least $5 billion (US$3.7 billion) a week in Canadian government bonds until the recovery is “well underway” -- in order to reinforce its rate-freeze promise. Macklem said he expects the recovery will have reached that state before the economy fully returns to full capacity, suggesting the central bank expects to begin paring back asset purchases before it raises interest rates.

For the Bank of Canada, it’s part of a transition away from emergency measures first deployed to ease stresses in financial markets, toward policy tools that ensure the economy is flush with cheap money even as market functioning returns to normal. Canada joins the Bank of England and the European Central Bank in providing explicit forward guidance. While the Federal Reserve hasn’t adopted the practice yet, a number of officials have expressed support for moving toward explicit guidance in the U.S.

While its foray into quantitative easing is new, it’s not the first time the Bank of Canada has offered up forward guidance to keep rates low -- doing so during the 2009 recession.

“In his first meeting at the helm of the Bank of Canada, Governor Tiff Macklem employed a new form of the conditional commitment that featured so prominently in BoC communications in 2009 and 2010.”

Macklem, who took over from Stephen Poloz as governor last month, sought to emphasize how the recovery will be slow and gradual.

Canada’s economy will need two years to fully bounce back, the bank said. It acknowledged the initial rebound from COVID-19 lockdowns has been strong, but it also painted a picture of a slow return to pre-pandemic levels of activity, persistent excess capacity, muted price pressures and plenty of uncertainty. Consumers are expected to remain cautious and business investment weak.

“The Bank expects economic slack to persist as the recovery in demand lags that of supply, creating significant disinflationary pressures,” policy makers said in the statement.