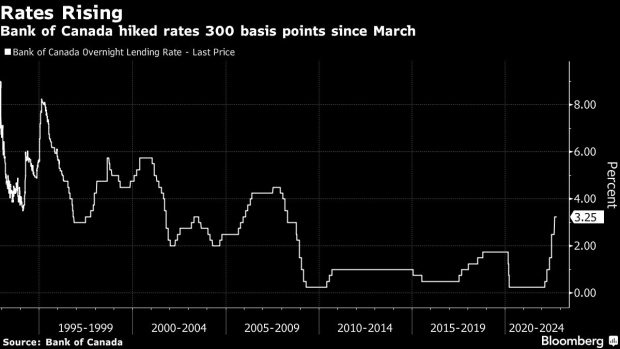 Tiff Macklem, governor of the Bank of Canada, speaks during a news conference in Ottawa, Ontario, Canada, on Wednesday, April 13, 2022. The Bank of Canada raised its policy interest rate by half a percentage point in its biggest hike in 22 years, and said rates are poised to move significantly higher as it aggressively wrestles inflation down from a three-decade high. , Bloomberg

(Bloomberg) -- The Bank of Canada is set to deliver a fifth -- but possibly final -- outsized interest-rate hike this week amid signs its inflation-fighting efforts may be dragging the nation’s economy into a recession.

Markets are pricing in a 75 basis-point increase in the central bank’s overnight rate at its decision Wednesday at 10 a.m. in Ottawa. That would bring the benchmark to 4%, a level not seen since March 2008.

The central bank, led by Governor Tiff Macklem, has been signaling its intent to continue tightening policy until it sees “clear evidence” inflation has started returning to its 2% target from about 7% currently.

But there are limits to how far borrowing costs can go due to Canada’s high level of household indebtedness. Investors will be watching for any hints from Macklem that the end of his hiking cycle is near.

Three weeks ago, Australia’s central bank surprised markets when it delivered a quarter-point increase, ending a string of half-point moves and becoming the first major central bank to break ranks.

Markets are anticipating the Bank of Canada will follow Wednesday’s outsized hike with two smaller 25-basis-point increases in coming months, before stopping altogether.

“It’s a tightrope that the economy is walking on at this point,” Avery Shenfeld, chief economist at the Canadian Imperial Bank of Commerce, said by email.

“We expect the Bank of Canada to hike interest rates by 75 basis points at the Oct. 26 meeting, but the choice between that and a 50-bp hike could be a close call. The larger move would keep pace with the Fed and promote restrictive financial conditions amid upside risks to inflation. The smaller move would be more consistent with the sharp slowdown in economic growth and rising recession risks.”

Up until now, Macklem has been wary of hinting at any change in focus. In two public appearances since the Australian pivot, he emphasized inflation as a bigger concern than an economic slowdown, in part because short-term expectations have been moving higher.

In a survey of households released this month, the central bank said Canadians still see inflation in two years at 5.2% -- well beyond the upper limit of its 1% to 3% control range.

That’s a big problem for Macklem and his officials. The more that businesses and households are convinced inflation will stay elevated, the more likely it is to happen.

Which is why he engineered the unprecedented sequence of supersized rate moves to quickly choke demand and show he’s serious.

The bank moved in half-point increments in April and June, hiked by a full percentage point in July and 75 basis points in September. In total, officials have increased borrowing costs by three percentage points since March, bringing the overnight rate to 3.25%.

If the benchmark rises to 4.5% in coming months as markets expect, borrowers will face prime rates offered by commercial banks nearing 7%. Those costs were around 2.5% until the hikes began in March.

That’s increasingly putting Macklem in the crosshairs of labor groups and some politicians as he pulls the economy closer to a recession, and pressure will only grow in coming weeks.

New Democratic Party Leader Jagmeet Singh told CTV News on Sunday there is “no evidence” the rate hikes are needed. He also wrote to Prime Minister Justin Trudeau directly, flagging recent changes in the government’s mandate agreement with the central bank that added labor-market conditions as a secondary consideration to price stability.

Finance Minister Chrystia Freeland, on her way into a cabinet meeting Tuesday, defended the Bank of Canada’s independence as it prepares another aggressive hike.

At least three of Canada’s main six lenders -- Royal Bank of Canada, Bank of Montreal and Bank of Nova Scotia -- expect the country’s economy to contract for two consecutive quarters next year in a so-called technical recession. And risks of a major downturn are growing, particularly given Canadian households are among the most indebted in the world.

The central bank will revise down its own estimates for growth on Wednesday when it releases a new suite of quarterly forecasts. Macklem and Senior Deputy Governor Carolyn Rogers are then due to speak to reporters at 11 a.m.

Coupled with still-elevated price pressures, Canadians in coming months will get their first taste of a stagflationary environment in a generation.

Yet, Macklem is hinting he’s prepared to err on the side of too much tightening rather than too little. Inflation has gone on higher and longer than the central bank predicted -- in part because of the Bank of Canada and Prime Minister Justin Trudeau’s government overstimulated the economy.

While inflationary pressures have shown some signs of easing in recent months because of falling gasoline prices, inflation has become increasingly domestic. Too much demand in the economy and elevated expectations are now the two major culprits.

“In the current context, inflation is not just high, it’s a long way above 2% target,” Macklem told reporters on Oct. 14 in Washington. “Against that background, we’re more worried about upside risks to inflation than downside risks.”