Bank of Canada will not hike rates as much as the U.S. Fed: CIBC's Benjamin Tal

The Bank of Canada is set to take another aggressive step in its hiking cycle, moving swiftly to tame inflation by bringing its policy interest rate back to a more neutral level.

Markets and most economists expect a second straight half-percentage point increase on Wednesday that would take the benchmark overnight rate to 1.5 per cent. A third 50-basis-point hike is expected in July, before policymakers led by Governor Tiff Macklem slow down the pace of tightening later this year.

“The Bank of Canada needs to remain aggressive and reassure the public that they will bring inflation to heel,” Benjamin Reitzes, rates and macro strategist with the Bank of Montreal, said by email. “It’s difficult, if not impossible, to predict when or if inflation expectations will become unhinged, but that’s clearly the risk.”

Wednesday’s decision, due at 10 a.m. in Ottawa, is a statement-only affair with no new forecasts. Deputy Governor Paul Beaudry, however, will give a speech and hold a news conference Thursday to provide more insight into the bank’s thinking.

The rate statement will likely sound hawkish to justify the jumbo hike and leave open the possibility of another half-point increase at the July 13 meeting. Policymakers will also probably comment on data showing continued excess demand and price pressures, and will concede that their most recent inflation forecasts are again proving stale. 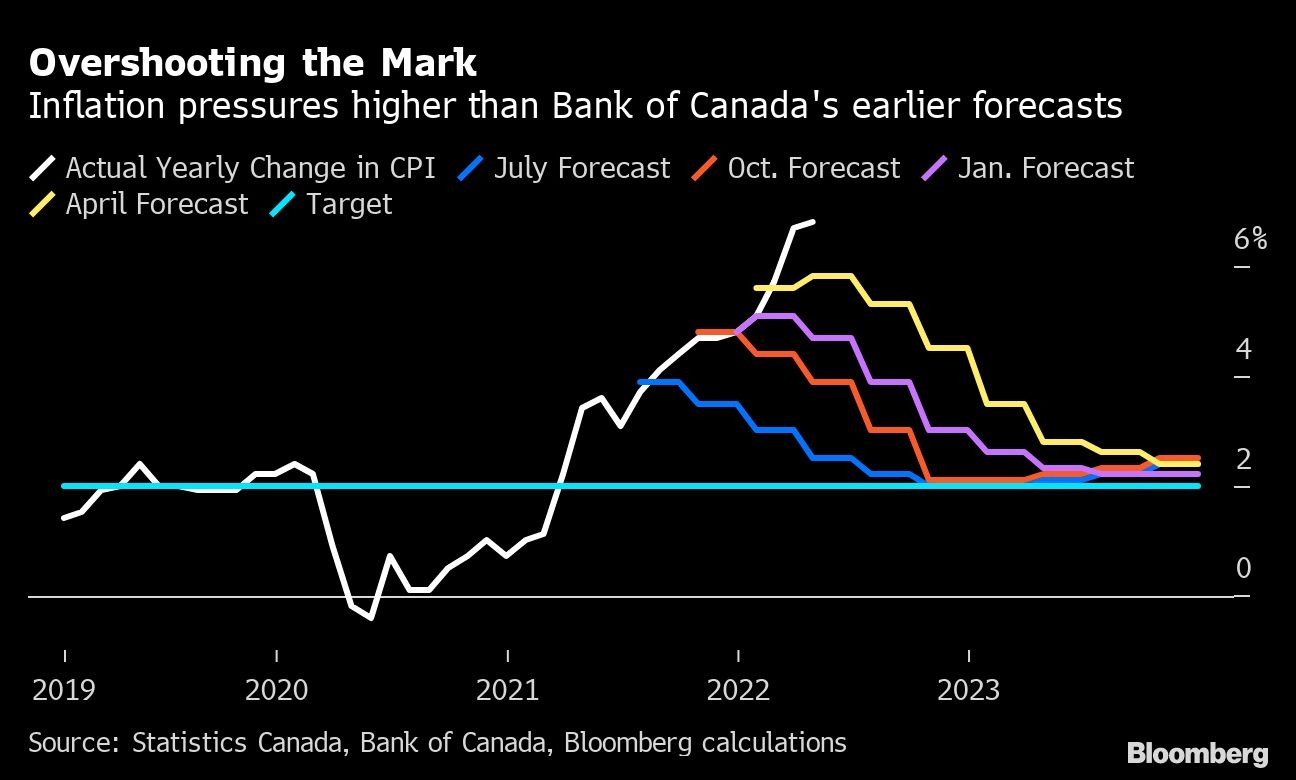 Gross domestic product expanded at a 3.1 per cent annualized pace in the first quarter, Statistics Canada reported Tuesday, reflecting the economy’s resilience and highlighting strong growth in consumption and domestic demand. Inflation, meanwhile, could top 7 per cent in May, hitting a four-decade high.

The nation is also dealing with a drum-tight labor market. The unemployment rate hit a record low of 5.2 per cent in April and job vacancies are now at a record high -- all signs of an economy that’s run out of spare capacity.

Interest rates, though, remain extremely stimulative. The central bank estimates its policy rate needs to rise to between 2 to 3 per cent in order for borrowing costs to no longer be inflationary. Rates that commercial banks give to their prime customers are typically just over 2 percentage points above the Bank of Canada benchmark.

Anything above 3 per cent would bring policy settings clearly into contractionary territory, though economists and markets don’t anticipate interest rates will need to rise to those levels -- a tacit assumption the central bank will be be able to engineer a soft landing.

“Upside risks to inflation loom larger than downside risks to growth. As a result, we expect the BoC will leave in a bias toward further tightening in the statement, via the line that it ‘judges that interest rates will need to rise further.’”

Policymakers are expected to ease up after three oversize moves. Trading in money markets suggest three or four more hikes are priced in after July, but all quarter-point, and the central bank is seen stopping around the 3 per cent mark.

Economist forecasts largely mirror the market pricing, though their expectations are for a slightly lower terminal rate. Some analysts doubt Canada’s housing-reliant economy would be able to cope with borrowing costs much beyond 2.5 per cent.

A new survey by KPMG found that 71 per cent of small business owners in Canada say higher interest rates are putting “material pressure” on profit margins, while more than half say they are expecting some sort of drop in the value of their firms.

Canada’s housing market already appears to be under stress from higher borrowing costs, with Canadian home prices falling for the first time in two years after transactions plunged 13 per cent in April. That’s helping to drive a sharp deterioration of Canadians’ finances.

“That is one of the key reasons why we think that, after another 50bp hike in July, the pace of hikes will slow down,” Andrew Grantham, an economist at Canadian Imperial Bank of Commerce, said in a report to investors.

Others see markets underpricing odds of rate hikes given Canada’s tight labor market, a large pool of excess savings and a massive tailwind from the recent surge in commodity prices.

The central bank hasn’t clearly signaled a path beyond the neutral range.

“We will be watching closely to see how the economy responds to higher interest rates,” Senior Deputy Governor Carolyn Rogers said in a speech earlier this month. “We’re not on autopilot. We will be looking for signs that the economy is returning to balance.”