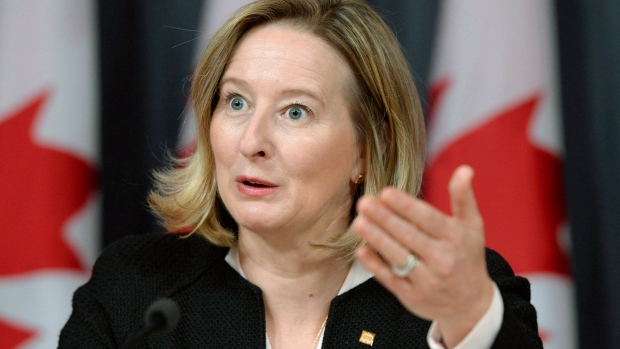 Deputy Governor of the Bank of Canada Carolyn Wilkins , THE CANADIAN PRESS/Justin Tang

The Bank of Canada will assess whether it needs to keep interest rates at near-record lows as the economy continues to grow, a senior official said on Monday, raising the prospect a rate hike could come sooner than anticipated and lifting the Canadian dollar.

In the bank's most upbeat comments on the economy, Senior Deputy Governor Carolyn Wilkins said first-quarter growth had been "pretty impressive," while the share of sectors adding jobs was growing.

"As growth continues and, ideally, broadens further, Governing Council will be assessing whether all of the considerable monetary policy stimulus presently in place is still required," Wilkins told a business audience.

The comments sent the Canadian dollar to its strongest level against the greenback since April 18.

Wilkins said Canada had largely adjusted to a drop in oil prices that prompted the bank to cut interest rates twice in 2015 to 0.50 percent to bolster the economy, which slipped into a brief recession.

The bank makes its next rate decision on July 12. While many economists had expected the bank to begin raising rates in 2018, markets were pricing in 43.6 percent odds of a hike by the end of 2017 following Wilkins' speech.

“This speech may be sending a clear signal, but don't expect the Bank of Canada to hit the hike button just yet….today's remarks are more likely to be aimed at preparing markets for eventual monetary tightening,” TD Bank Senior Economist Brian DePratto said in a note to investors.

His counterpart at the Bank of Montreal saw a more rapid timeline, however.

"It looks as though the bank is looking to shift gears," said Benjamin Reitzes, senior economist at BMO Capital Markets.

"There's a decent chance that if things go right over the next few months, rate hikes could be coming sooner than everybody thought."

Wilkins said while there were encouraging signs that growth was broadening, the outlook for inflationary pressures mattered most to the bank.

Even if only a few sectors were expanding enough to absorb excess capacity, the bank would need to take the appropriate monetary policy action to meet its two per cent inflation target, she said.

Inflation is currently at 1.6 per cent, thanks in part to slack in the economy, Wilkins said. She noted other indicators also point to ongoing spare capacity, including only moderate growth in wages.

Wilkins said changes in monetary policy could take as long as two years to have their full effect on inflation. This means policymakers must consider not just current economic conditions, but also how they will evolve, she said.

"You do not want to have to slam on the brakes at the last second," she said.

Uncertainty around tax and trade policies in the United States will likely remain an important uncertainty in the bank's outlook, Wilkins said.​