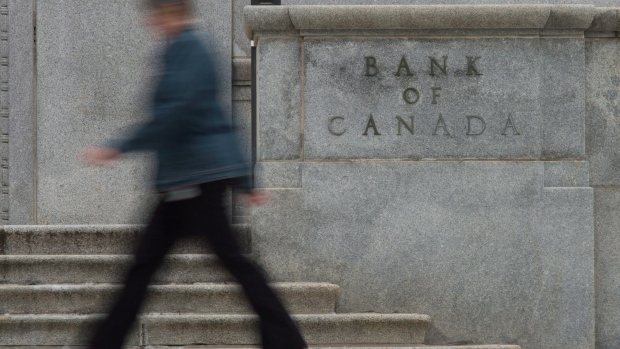 A woman walks past the Bank of Canada Wednesday September 6, 2017 in Ottawa. A new research paper by a Bank of Canada staffer says most of the proposed benefits of the technology known as blockchain don't really come from features unique to blockchain. , THE CANADIAN PRESS/Adrian Wyld

OTTAWA - The Bank of Canada is likely to raise interest rates twice more this year as the economy regains momentum in the current quarter but will hold them steady at its April 18 meeting, according to a Reuters poll of economists.

Risks posed by highly indebted consumers and an uncertain future around Canada's trade arrangements with the United States, its largest export market, are expected to restrain the central bank from tightening policy more quickly.

After growing strongly last year, the economy got off to a disappointing start in 2018. The first quarter's performance is forecast to be further reined in by weak trade and a housing market coming off the boil.

Along with a tightening labor market and rising inflation, that should prompt the bank to resume raising interest rates, with a 25-basis-point increase in the third quarter and another in the fourth quarter.

"The growth fears you're seeing right now in the market generally probably aren't going to last," said Benjamin Reitzes, senior economist at BMO Capital Markets, who sees the Bank of Canada next raising rates in July.

Canada's central bank has hiked rates three times since July 2017, while the U.S. Federal Reserve raised its benchmark rate last month and is due to raise rates twice more this year. The Bank of Canada has said it will be cautious in considering future moves.

"It would be reasonable for the Bank to continue to raise rates slowly but surely. Going in July is not particularly aggressive, given their prior move would have been in January," Reitzes said.

Twenty-seven of 29 economists said rates would remain on hold at 1.25 percent at its April 18 policy decision.

Like other central banks, the BoC is trying to lift rates off historically low levels imposed as a response to the global financial crisis a decade ago, but without snuffing out economic growth that has been supported by rock-bottom rates.

Fourteen poll respondents who answered an additional question said the bigger risk to the economy would be if the central bank raised rates too quickly. Just three said tightening policy too slowly was a bigger risk.

There are also a number of uncertainties likely to prompt policymakers to take their time, including the uncertain fate of the North American Free Trade Agreement (NAFTA) and how highly indebted Canadian households would handle higher rates.

In March, the BoC held rates steady, saying trade policy was an "important and growing source of uncertainty," but February's inflation rate was a three-year high of 2.4 per cent, above the central bank's 2 per cent target.

Still, Canada's trade-sensitive dollar is set to advance over the coming year as prospects improve for a revamped NAFTA trade deal.

Higher borrowing costs, along with recent tighter mortgage regulations, have already weighed on home sales and prices. The Bank has said it could take several months to see how consumers react to rate hikes already in place.

"What really is dictating the more gradual pace is the high household debt loads that make consumers that much more sensitive to rate hikes," said Brittany Baumann, macro strategist at TD Securities, who expects just one more rate hike this year.

Canadian household debt as a share of income remained near a record high in the fourth quarter.

Still, analysts do not see much impact on housing starts for now, with ground breaking on new homes expected to average 204,000 units in 2018, in line with levels considered to be consistent with demographic demand.