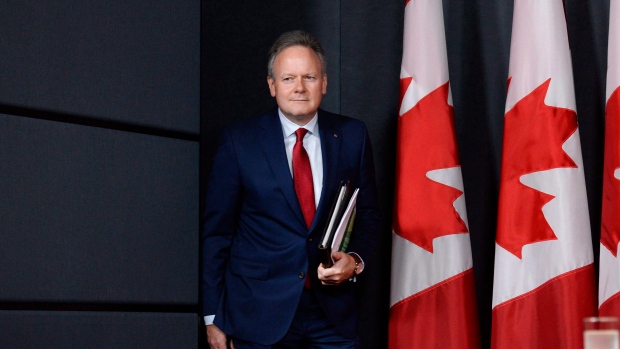 OTTAWA — The Bank of Canada is on course to raise interest rates twice more this year as it aims to strike a balance between a stronger economy and a number of economic risks, including trade negotiations and new housing regulations, a Reuters poll found.

The central bank has raised interest rates three times since last July, amid a robust job market and solid economic growth, but policymakers have said repeatedly they will be cautious in considering further hikes.

Indeed, there are many unknowns for the bank to be cautious about, particularly the uncertain fate of the North American Free Trade Agreement (NAFTA) as negotiators convene for a seventh round of talks this week.

Fourth-quarter growth is also on track to come in below the Bank of Canada's 2.5-per-cent forecast, which economists said is likely to leave the data-dependent central bank on hold.

"Given the more modest pace of economic growth recently, as well as the uncertainty surrounding NAFTA and the housing regulations, we believe the Bank of Canada will move to the sidelines for a spell," said Benjamin Reitzes, Canadian rates and macro strategist at BMO Capital Markets.

The 30 analysts polled by Reuters unanimously forecast the central bank will hold its benchmark rate at 1.25 per cent at its next announcement on March 7.

From there, the median forecast is for a hike in the second quarter and another increase in the fourth quarter, which will bring rates to 1.75 per cent by the end of the year.

While the second-quarter hike is a quarter sooner than anticipated in the last Reuters poll done in January, it still leaves rates at the same level that was expected for 2018. Analysts expect rates to go to two per cent in the first quarter of 2019.

Markets see an 80-per-cent probability the Bank of Canada will raise rates in May, while a hike is fully priced in for July.

How heavily-indebted Canadians will handle the rate hikes the central bank has already put in place is another risk factor policymakers have said they are closely watching.

Consumer debt in Canada has ballooned in the years since the global financial crisis, with much of that going to a housing market where prices have climbed, particularly in the major cities of Toronto and Vancouver.

Tighter mortgage lending rules put in place at the start of the year have already dampened house resales and economists expect the central bank will be wary of moving too aggressively and risking a more disorderly pullback in the market.

As well, the province of British Columbia, home to Canada's most expensive real estate market, earlier this month announced it will crack down on real estate speculators by expanding its foreign buyers tax and introducing a new speculation tax.

"It wouldn't be appropriate to increase the policy rate further knowing that the British Columbia housing market is about to begin a challenging adjustment period," said Sebastien Lavoie, chief economist at Laurentian Bank of Canada.