BoC withdrawing crisis liquidity programs in place during the pandemic

The Bank of Canada provided the greatest guidance yet into how it plans to slow purchases of government bonds as the economic recovery accelerates, fueling expectations it could begin doing so as soon as April.

In a speech on Tuesday, Deputy Governor Toni Gravelle said the central bank is winding down emergency liquidity programs it deployed to grease markets when the coronavirus hit last year, including programs to buy provincial and corporate debt. He also provided insight into how the central bank plans to pare back its main government bond purchasing program -- including a pledge that any tapering will be gradual.

Policy makers have been buying a minimum of $4 billion in federal government bonds each week to help keep borrowing costs low. Economists say that pace may no longer be warranted, with an outlook that appears to show the economy growing at a much stronger clip than officials had been expecting.

Tapering in April is “as near a certainty as these things can be,” Andrew Kelvin, chief Canada strategist at TD Securities, said by email. “If they were planning on maintaining bond purchases at these levels, it would’ve made sense to push back against tapering expectations.” 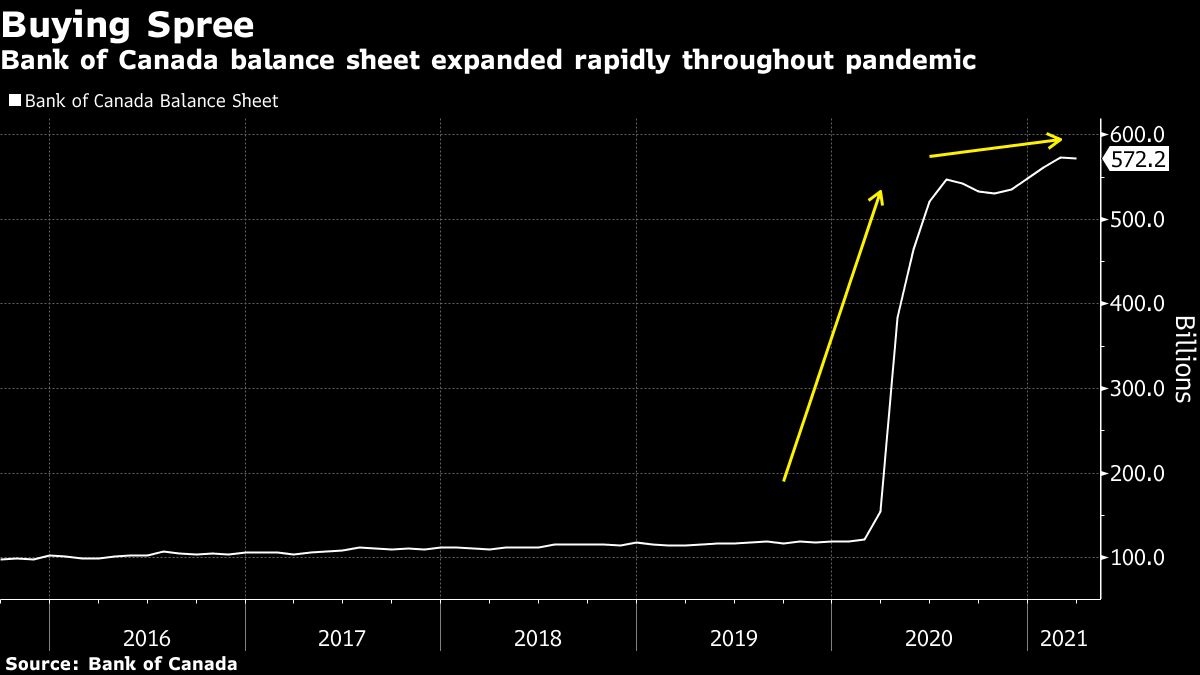 The central bank also wants to avoid taking ownership of too large a share of the outstanding bond market. Currently, the bank owns a little more than 35 per cent of the total market of outstanding government of Canada bonds. Governor Tiff Macklem has said that when holdings rise above 50 per cent, market functioning could get distorted.

In remarks before the CFA Society Toronto, Gravelle highlighted how the tapering process will work, indicating the central bank is seriously considering the option. He said the process will be “gradual and in measured steps” and will conclude with net purchases at zero when the “recovery is well underway.”

“We will eventually get down to a pace of QE purchases that maintains -- but no longer increases -- the amount of stimulus being provided,” Gravelle said.

The timing of getting to this so-called “reinvestment phase” will be guided by the central bank’s economic outlook, said Gravelle. Adjustments to the program are distinct from any change to the policy interest rate, he added, downplaying any chance of an imminent hike of the Bank of Canada’s 0.25 per cent overnight policy interest rate.

“It won’t necessarily mean that we have changed our views about when we will need to start raising the policy interest rate,” Gravelle said.

Yields on Canadian bonds rose after the speech, but pared the gains. Canada’s 10-year benchmark was trading at 1.507 per cent as of 3:15 p.m. in Toronto.

With the discontinuation of some of its programs, Gravelle said the maturity of short-term funding facilities held by the central bank will reduce its balance sheet to about $475 billion by the end of April, about $100 billion smaller than its current level.

The bank’s decision to end its emergency programs about a year after initiating them is a testament to the recovery in market functioning and global financial conditions, he said.

“We can take these steps because now there is ample system-wide liquidity for financial institutions to draw from,” Gravelle said. He noted the bank can reactivate any market programs should market stress re-emerge.