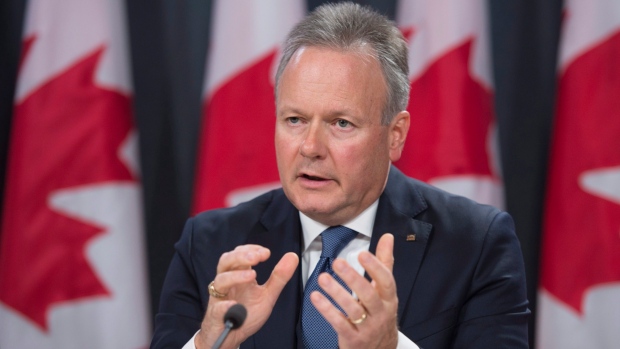 Canada's economy will take a hit from Ottawa's latest measures to cool the real estate market as the number of homes changing hands slows in wake of the new rules, the Bank of Canada said Wednesday.

The central bank cut its growth forecast for this year and 2017, "due in large part to slower near-term housing resale activity," and also a weaker-than-forecast export activity.

Housing has been a pillar of economic strength for Canada, but the new rules are expected to shave 0.3 percentage points off real GDP by the end of 2018.

Still, the bank held its key policy rate at 0.5 per cent, saying inflation will settle near its two per cent target early next year.

"Given the downgrade to our outlook, governing council actively discussed the possibility of adding more monetary stimulus at this time, in order to speed up the return of the economy to full capacity," Poloz said in prepared remarks.

"However, we identified a number of significant uncertainties... Importantly, the government’s actions to mitigate risks in the mortgage market were not seen as an impediment to easier monetary policy."

In its Monetary Policy Report, the bank said it also expects home builders will react to the new rules by modestly shifting focus toward building smaller homes.

The bank sees the economy growing 1.1 per cent this year and 2 per cent next year, down from 1.3 per cent and 2.2 per cent, respectively from its July forecast. The housing sector will contribute less to economic growth this year than previously thought, and will become a drag on the economy in 2017.

Overall, the bank doesn't see the economy returning to its full potential until the middle of 2018, later than the previous forecast of late-2017.

HAVE YOUR SAY: What’s the best course of action for the Bank of Canada? https://t.co/TaBODtnDJT

The new housing rules, which took effect Monday, make it harder for Canadians to get a mortgage. The more stringent mortgage rate stress test now being applied by lenders means many families will find their home-purchasing power cut between 18 to 24 per cent.

The measures could see many first-time homebuyers pushed out of the market. The country's housing agency has said that's a small price to pay for financial stability.

The housing market has been an area of considerable concern for Bank of Canada Governor Stephen Poloz, as low interest rates and soaring home prices saw Canadians take on record levels of debt.

"The new measures are expected to dampen household vulnerabilities over time, in part by improving the average credit quality of new borrowing," the bank said Wednesday.

Poloz has also been banking on a recovery in non-commodity exports to fuel economic growth in the wake of the collapse in crude prices.

While the exports sector has been on the upswing, the bank said recent performance is "not strong enough to make up for ground lost during the first half of 2016."

"Elevated uncertainty" in the United States, Canada’s largest trading partner, will leave business investment south of the border on a lower path than expected.

When it comes to the energy sector, the bank says the plunge in investment may be reaching a bottom. That will leave investment in the oil patch about 60 per cent lower than 2014 levels.

The bank’s oil price projections assumes West Texas Intermediate will remain near current levels of US$46 a barrel and the Canadian dollar will trade close to its recent average of 76 cents U.S.

So where's the economic growth going to come from in the near-term? The bank is counting on the Canadian consumer to keep spending.