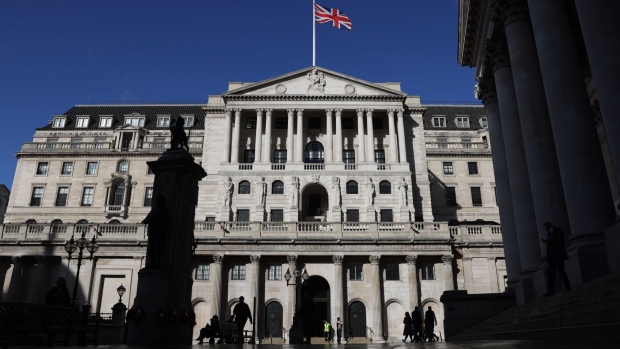 A British Union flag above the Bank of England in the City of London, U.K., on Wednesday, Oct. 20, 2021. The U.K. Treasury is resisting pressure to increase spending in next week's budget because of concern that doing so would backfire by prompting the BOE to raise interest rates more aggressively. Photographer: Hollie Adams/Bloomberg , Bloomberg

(Bloomberg) -- Swati Dhingra, a trade specialist and a vocal critic of Brexit, will join the Bank of England’s Monetary Policy Committee and bring the number of women on the panel to the most since 2005.

Dhingra, an economics professor at the London School of Economics, will start work at the UK central bank on Aug. 9, succeeding Michael Saunders, Chancellor of the Exchequer Rishi Sunak said in a statement on Thursday.

She will join a central bank at the vanguard of global interest-rate increases, with the BOE in the midst of its fastest tightening cycle since it gained independence as officials try to arrest inflation forecast to top 10% later this year.

Her appointment adds a trade expert to the BOE’s ranks as the UK tries to navigate a economy beset with supply-chain issues and continuing fallout following its exit from the European Union.

Dhingra’s position on monetary policy isn’t known, but could prove pivotal as the MPC tries to strike a balance between tackling inflation and supporting growth. Saunders, who she is replacing, is currently the most hawkish member of the committee and was in a minority seeking a half-point rate increase this month rather than the quarter-point move that transpired.

Dhingra has been a critic of Brexit, and in 2019 wrote an article for UK in a Changing Europe entitled “UK economy since Brexit vote: slower growth, lower productivity, weaker pound.”

Writing in the London Review of Books in 2017, she said that “counting on future trade deals with countries like China, India and the US to replace our existing economic ties to the EU is wishful thinking.”

The appointment brings the number of women on the nine-member MPC to three, along with Catherine Mann and Silvana Tenreyro. That’s the highest number since 2005, and the most the panel has ever had in its 25-year existence.