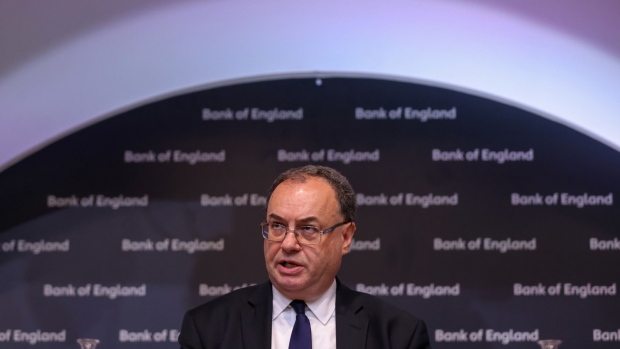 Bank of England Governor Andrew Bailey said a series of shocks that the UK central bank couldn’t anticipate are responsible for driving inflation well past the 2% target.

The war in Ukraine, a worsening of the coronavirus in China and a sizable drop in the size of Britain’s workforce are all putting upward pressure on prices, and policy makers have been surprised by each of those, Bailey said.

The remarks answer criticism from members of Parliament that the bank acted too slowly to contain inflation, causing the biggest squeeze in living standards in a generation. Bailey said there’s little that he or the Monetary Policy Committee could do differently.

“I should emphasize, I don’t feel at all happy about this,” Bailey told lawmakers in Parliament on Monday. “There’s been a series of supply shocks. We can’t predict things like wars. It is well established practice to accommodate supply shocks where they’re expected to be transient. A sequence of shocks like this, which have really come with no gaps like this between them, is almost unprecedented.”

Consumer confidence has plunged in recent months as a surge in energy costs, taxes and higher prices for goods from food to clothes bit into spending power. Prime Minister Boris Johnson’s government has pledged to help but targeted assistance mostly to those who have jobs, omitting pensioners, the young and people on benefits.

The Sunday Telegraph reported one senior minister as saying the BOE has “one job -- to keep inflation around 2%. It’s hard to remember the last time it achieved its target.”

Bailey and his colleagues have boosted interest rates at four straight meetings, and investors expect further action in the coming months. Even so, the BOE warned earlier this month that inflation could top 10%, raising the risk of recession.

“This is a bad situation in which to be in,” Bailey said, noting that 80% of the increase in prices is due to energy and tradeable goods prices.

He’s also concerned that the labor force has shrunk 1.3% since the start of the pandemic, a historically large decline that has helped fan upward pressure on wages.

“We have seen a fall in the size of the labor market,” Bailey said. “The persistence and scale of this drop has been a surprise to us. We’ve seen an increase in long-term sickness of about 320,000 people. Our thinking now is to assume labor market participation remains flat.”

Bailey said the squeeze on consumers is the “main driver of the profile of inflation -- particularly what brings it down” toward the end of the BOE’s forecast horizon.

“That is going ot have an effect on domestic demand,” Bailey said. “It is going to damp activity. It will increase unemployment. It will have a much bigger effect than the increases in the bank rate that we do.”

Deputy Governor Dave Ramsden defended the bank, saying “monetary policy was not going to do the job in these circumstances.”

His colleague Michael Saunders, an external member of the nine-person MPC, said: “There’s really no sensible monetary policy which could have been put in place ... that could have kept inflation at the 2% target this year.”

Before the hearing, Citigroup Inc.’s Benjamin Nabarro defended the BOE in a note to clients, saying blaming policy makers “could risk the bank’s authority and position in public life.”

“The criticism, especially that the bank could do more here to offset the cost-of-living squeeze, is broadly unfounded,” Nabarro said. “We see considerable risk the government increasingly apportion blame for recent cost increases onto the Bank, debasing its public standing and credibility.”