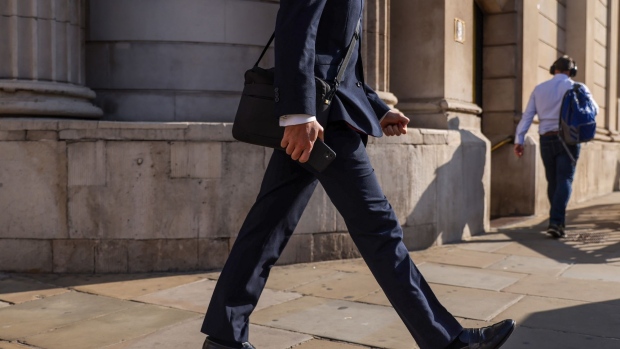 A businessman walks past the Bank of England (BOE) in the City of London, U.K., on Thursday, Aug. 5, 2021. The Bank of England (BOE) may move a step closer to tightening monetary policy, unwinding 900 billion pounds ($1.2 trillion) government bond purchases while also opening the possibility that borrowing costs could be pushed below zero. Photographer: Bloomberg/Bloomberg , Photographer: Bloomberg/Bloomberg

The Bank of England could raise interest rates twice by May to curb a surge in inflation, but that largely depends on how high unemployment rises after the end of the government’s furlough program, according to Bank of America Merrill Lynch.

“Furlough-end remains key,” BofA economist Robert Wood wrote in a report. “If it goes well, or the BOE feels pressured by spot inflation, it could hike as soon as December and a second time next May.”

The U.S. bank’s main scenario now anticipates the BOE raising its key rate by 15 basis points to 0.25% in February instead of May. BofA shifted its view after the BOE said on Thursday that the case for tightening monetary policy has strengthened.

The central bank also said it expects inflation to exceed 4% later this year, more than double its target.

“If furlough end results in no rise in unemployment, a hike by or before February would in our view be a very high likelihood,” Wood wrote. “But we think that scenario is far from guaranteed.”

The wage-support program ends on Sept. 30. The central bank expects unemployment to peak below 5%, well below its previous scenarios at the height of the pandemic crisis.