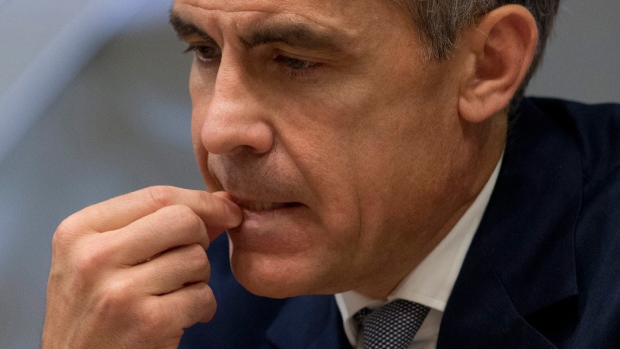 The Bank of England's governor Mark Carney pauses as he attends the quarterly report press conference at the Bank of England in central London, on Thursday Aug. 4, 2016. , Justin Tallis/ Pool via AP

LONDON - The Bank of England cut interest rates to next to nothing on Thursday and unleashed billions of pounds of stimulus to cushion the economic shock from Britain's vote to leave the European Union.

Acting on its chief economist's wish to use "a sledgehammer to crack a nut," the BoE reduced interest rates by 25 basis points to a record-low 0.25 per cent.

This first cut since 2009 was accompanied by a pledge to buy 60 billion pounds (US$79 billion) of government bonds with newly created money over the next six months, and two new stimulus schemes. One will buy 10 billion pounds of high-grade corporate debt, the other - potentially worth up to 100 billion pounds - is to ensure banks pass on the full rate cut to borrowers.

The Bank said most BoE policymakers expected to cut the main interest rate to even closer to zero later this year, and sharply downgraded its outlook for growth next year.

"By acting early and comprehensively, the (Bank) can reduce uncertainty, bolster confidence, blunt the slowdown and support the necessary adjustments in the UK economy," BoE Governor Mark Carney told a news conference.

Sterling fell as much as 1.6 per cent against the dollar following the announcement, while British government bond yields hit record lows and the main share index rose by 1.6 per cent.

Carney said he had unveiled an "exceptional package of measures" because the economic outlook had changed markedly following the Brexit vote. The Bank expects the economy to stagnate for the rest of 2016 and suffer weak growth next year.

By cutting rates to the lowest in its 322-year history, the BoE joins the Bank of Japan and the Reserve Bank of Australia, which both undertook unprecedented stimulus in the past week.

Finance minister Philip Hammond welcomed the rate cut and said he and Carney had "the tools we need to support the economy as we begin this new chapter and address the challenges ahead."

Carney said the BoE had scope to do more stimulus in the form of rate cuts and quantitative easing, but ruled out negative interest rates, and rejected "flights of fancy" such as handing out 'helicopter money' with no strings attached.

He added that commercial banks had "no excuse" not to pass on the BoE's rate cut to their customers.

The Bank's policymakers were not completely united on how to respond to the fallout from Brexit.

The cut in rates and the measure intended to ensure banks passed it on to consumers - known as the Term Funding Scheme (TFS) - gained unanimous support.

Forbes also voted against buying corporate debt - something the BoE did briefly after the financial crisis.

The BoE had wrong-footed markets by keeping rates on hold in July, but since then its chief economist Andy Haldane argued the central bank should be ready to use a "sledgehammer" to tackle even tentative signs of a downturn.

While many business surveys show Britain's economy has slowed sharply and may even be entering recession, it is too soon for official data on how the EU vote is affecting output.

But the Bank is clearly worried. "Although there had been some expectation of QE, the BoE went big," HSBC economist Simon Wells said. "The question is whether all this ... will have a significant impact on the real economy. Yields are already very low and uncertainty is the biggest obstacle to growth."

The BoE left its forecast for growth this year steady at 2.0 per cent, as the economy expanded faster in the first half of 2016 than it had expected in May.

But 2017 brings a sharp downgrade to growth of just 0.8 per cent from a previous estimate of 2.3 per cent - the biggest downgrade in growth from one Inflation Report to the next, exceeding what was seen in the financial crisis. The growth outlook for 2018 was cut to 1.8 per cent.

The BoE also revised up its inflation forecasts sharply, due to the big fall in sterling since the financial crisis, predicting it will hit 2.4 per cent in 2018 and 2019. It said the costs of trying to bring it back to its 2 per cent target in the immediate future would exceed the benefit.

The Term Funding Scheme is designed to make sure lower interest rates set by the BoE are reflected in the costs commercial banks charge households and firms to borrow funds.

For the next 18 months lenders will be able to borrow four-year central bank reserves at rates close to the Bank Rate. They will charge a penalty rate to banks that reduce net lending.

Unlike the BoE's Funding for Lending Scheme, which was being wound down before the Brexit vote, the TFS is funded by newly created money, making it a form of quantitative easing.

"Today's decision will test the limits of monetary policy which many would argue ran out of runway some time ago," Bill Michael, global head of financial services at KPMG said.