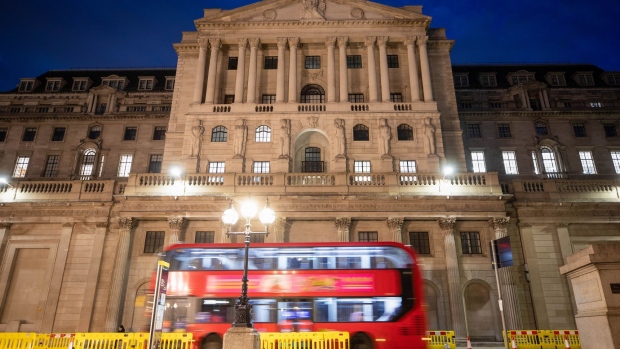 The Bank of England sought to reassure investors that it won’t tighten monetary policy anytime soon despite the U.K. economy showing signs of a faster rebound than initially expected.

The pound gained after the central bank’s relatively robust projections and policy makers also hinted that they’re not ready to follow other central banks in taking borrowing costs below zero.

In a briefing to reporters following the decision, Governor Andrew Bailey said negative rates “are part of our toolbox, but at the moment we don’t have a plan to use them.”

Still, he also said the BOE is ready to do more if needed, and the Monetary Policy Committee stressed the economy is unlikely to fully recover before the end of 2021, slightly later than the previous scenario.

The committee voted unanimously to keep its asset purchase target at 745 billion pounds ($980 billion) while holding the benchmark interest rate at a record-low 0.1%. The pace of bond purchases will be slowed to 4.4 billion pounds a week from Aug. 11.

The MPC “does not intend to tighten monetary policy until there is clear evidence that significant progress is being made in eliminating” economic slack and “achieving the two per cent inflation target sustainably,” it said.

The question is whether the comments will ultimately temper expectations that another round of bond purchases will be required before the end of the year, with renewed lockdowns in parts of the country and the government’s program to support jobs drawing to a close.

The mounting risks of a no-deal Brexit have also fueled speculation that the BOE might consider cutting interest rates below zero. Officials said that their review of such a policy is ongoing, but that its effectiveness could be hampered by the damage the crisis has wrought on bank balance sheets.

Investors are betting that rates will be cut below zero in about September 2021.

The updated projections see inflation getting back to the two per cent target within its forecast horizon, which could suggest it currently doesn’t see a need to ease further. The new guidance on the path of policy could be an attempt to offset any investor concern that it’ll tighten too soon.

“The Bank of England delivered a surprisingly upbeat message at its August meeting. We still think its likely the central bank’s forecasts will prove too optimistic and more stimulus will be on the cards later in the year.”

Officials said the downturn will be less severe than outlined in a scenario it published in May, but added that the risk to the outlook is skewed to the downside, with gross domestic product not expected to exceed pre-virus levels until the end of 2021.

That scenario meshes with the views of policy maker Silvana Tenreyro, who has said the sharp bounceback so far could flatten out toward the end of the year.

BOE Chief Economist Andy Haldane -- who voted against the last increase in quantitative easing in June -- has been slightly more optimistic about a quick recovery, saying last month that it’s proved to be V-shaped so far.

In the shorter term, inflation is expected to fall further below the target and average around 0.25 per cent in the latter part of the year, before returning in about two years.

Policy makers expect unemployment to rise materially to about 7.5 per cent by the end of the year. That’ll be accompanied by an increase in inactivity of about 400,000 people relative to before the crisis.

Most officials agree that the labor market will be key to the recovery. Economists are warning more than 3 million could be out of work before the end of 2020. That would be the worst since the de-industrialization of Britain under Margaret Thatcher in the 1980s.

Consistent with the government’s stated policy aims, the BOE’s forecasts don’t include a second nationwide lockdown, but do assume a slow recovery with the possibility of more restrictions.

“In our view, economic developments will very likely fall short of this near-perfect scenario and inflationary pressure will remain subdued for longer than the BOE currently expects,” said Kallum Pickering, a senior economist at Berenberg. “As a result, policy makers may eventually need to do more to support the recovery.”

--With assistance from Andrew Atkinson and James Hirai.