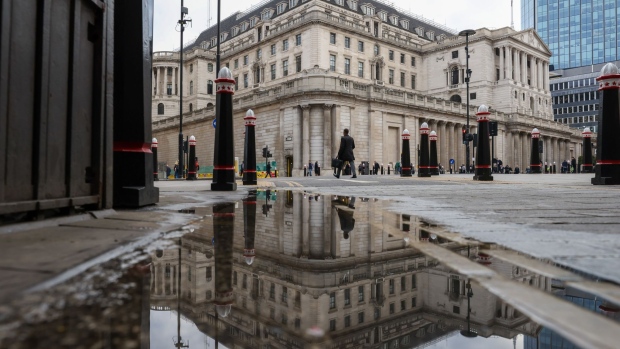 The Bank of England (BOE) on the morning of the announcement of its latest interest rate decision in the City of London, U.K., on Thursday, May 5, 2022. The Bank of England is set to mark a major birthday with two big decisions, balancing its fight against inflation with keeping the recovery from pandemic on track. Photographer: Hollie Adams/Bloomberg , Bloomberg

The Bank of England said the global economic outlook has “deteriorated materially” after surging commodity prices pushed up inflation around the world, posing a further downside risk in months ahead.

The UK central bank said volatility in the cost of energy and raw materials poses a significant risk of disruption that could amplify economic shocks in the future. Officials will conduct a probe of the “opacity” and “lack of data” in commodity markets and how those links feed vulnerabilities.

The warning came in the BOE’s report into financial stability published on Tuesday. Officials said they’d move ahead with annual stress tests on banks in September, evaluating the possibility of a “deep” recession and further increases in interest rates.

They also lifted the countercyclical capital buffer that banks must meet to 2%, the level it was at before the pandemic, starting in July 2023. The BOE had eased the regulatory capital demand to help firms keep pumping money into the economy.

Despite spikes in inflation and borrowing costs, the BOE said that most UK households and businesses remain well placed to cope with strain on their finances. The capital position of British banks remains “strong, and profitability has strengthened,” the BOE said in its report.

The BOE noted that inflationary pressures around the world have intensified after Russia’s invasion of Ukraine, and the real income of households is being squeezed by a surge in prices.

Still, wage growth and the government’s package of support measures will soften the blow and keep the number of vulnerable borrowers steady with levels at the start of the year. That’s even as some borrowers roll off cheap fixed-rate loan deals and will have to refinance at higher interest rates.