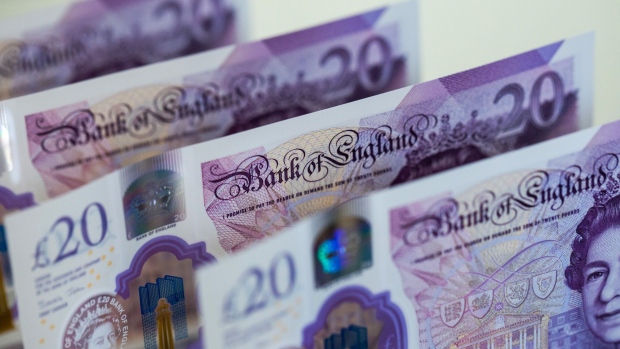 British twenty pound notes stand in this arranged photograph in Danbury, U.K., on Monday, March 23, 2020. The pound rose, boosted by broad dollar weakness, after the U.K. government banned all unnecessary movement of people for at least three weeks in order to reduce the spread of coronavirus. , Bloomberg

(Bloomberg) -- British consumers have just one week left to spend the last £11 billion ($12.4 billion) of paper banknotes that remain in circulate before the cash ceases to become legal tender.

As of Sept. 30, almost £6 billion of old £50 notes and more than £5 billion of the £20 ones will no longer be accepted by UK businesses, the Bank of England said Friday. That’s a total of more than 360 million notes.

People can exchange the paper for new currency made of a plastic-like polymer by appearing in person at the BOE’s London headquarters in Threadneedle Street, sending them through the  post or at certain Post Offices. Many commercial banks will also allow them to be deposited into accounts.

On Thursday morning, line of people for the cash exchange desks at the BOE were already extending out onto the street.

The end of the £20 and £50 paper notes will complete the UK transition to new polymer banknotes. All of the polymer versions of the currency carrying a portrait of Queen Elizabeth II can still be used as normal, the BOE said.