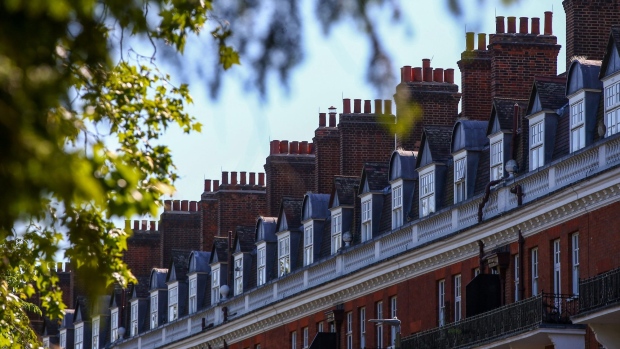 (Bloomberg) -- The Bank of England is monitoring developments in the housing market “very carefully” as higher interest rates cool the tearaway price growth of the past 18 months, Chief Economist Huw Pill said.

Briefing agency contacts about the BOE’s latest set of forecasts, Pill said he did not expect rate rises to cause a housing market crash but policy makers were alert to the risk that higher borrowing costs could cause problems for highly indebted households.

However, he confirmed that the BOE is keeping a close eye on debt-servicing costs, which can squeeze consumption as higher rates leave households with less disposable income and sap consumer spending.

“The stress on household balance sheets remains at quite low levels by historical standards. This is an issue we will need to monitor very carefully,” Pill said.

The BOE monitors signs of household distress through a measure of debt-servicing ratios. When debt costs rise above 40% of a household’s pre-tax income, there is clear evidence that they are more likely to run into financial difficulty or default, the BOE says.

Those levels remain under control for now but will soar to levels last seen in 2006, on the eve of the financial crisis, a central bank official confirmed, if rates rise to around 2.5% - roughly in line with the market forecasts used in the BOE’s monetary policy report.

Pill spoke hours after mortgage lender Halifax said house prices rose for a 10th consecutive in April but warned that the market is likely to slow by the end of the year. The 1.1% increase left values almost 11% higher than a year earlier.