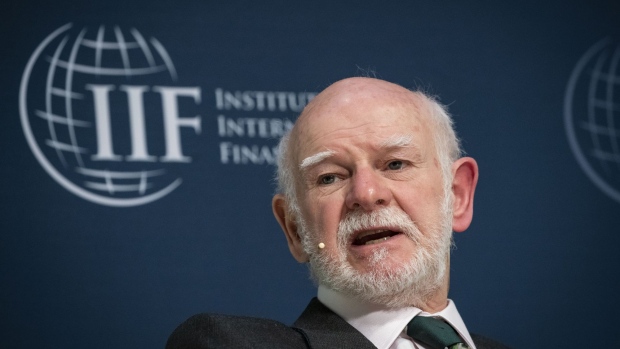 (Bloomberg) -- The Bank of England should raise rates more quickly to signal its willingness to tackle inflation over the medium term, according to NatWest Group Plc Chairman Howard Davies.

The weakness of sterling is adding to global pressure from rising fuel and food prices, he said in an interview with Bloomberg TV Friday. “If you get a very sharp exogenous shock, like an oil price increase of the sort we’ve had, and the war, then you can’t expect central banks to deal with that instantly,” he said. “But what they must do is present a plausible path of interest rates which is going to deliver them back to the inflation target in 18 months to two years’ time.”

His comments come a day after the Bank of England raised interest rates for a fifth straight meeting and sent its strongest signal yet that it’s prepared to unleash larger moves if needed. Governor Andrew Bailey said the bank “would be particularly alert to indications of more persistent inflationary pressures, and would if necessary act forcefully in response.”

Davies, who was deputy governor of the BOE from 1995 to 1997, said the central bank should have raised by more than 0.25 percentage points yesterday “in order to give credibility” to its medium-term approach, which would potentially relieve some of the downward pressure on sterling.

However, Davies said it was “unlikely” that the pound would return to the $1.45 level seen before the Brexit vote, even as the hawkish outlook from the BOE sent the currency rising to about $1.23. The country’s structural trade deficit has been offset by capital flows for a long time, but “you can only sell the London property market once externally,” said Davies.

After years of rock-bottom interest rates, higher rates should help boost margins at Britain’s lenders. But that may be outstripped by the damage to demand if the economy weakens. NatWest, one of the UK’s largest mortgage lenders, beat expectations in the first quarter earnings on higher interest rates and an economic boost from the UK’s emergence from Covid restrictions, even as the bank warned the outlook could change for borrowers as inflation starts to bite.