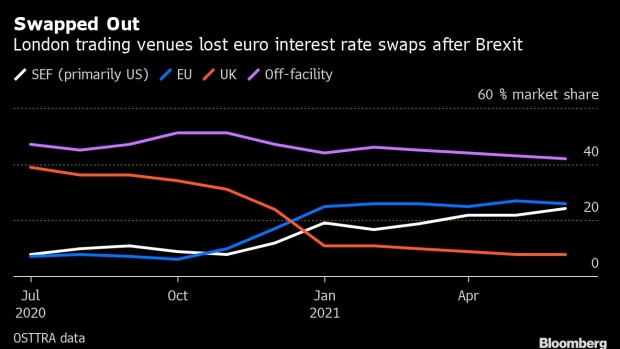 Andrew Bailey, governor of the Bank of England, before a Bloomberg Television interview in London, U.K., on Thursday, Sept. 2, 2021. Bailey issued a fresh broadside over the European Union’s post-Brexit plans on clearing houses, warning any upheaval risked a "real threat" to financial stability. , Bloomberg

Speaking in a pre-recorded interview for a Bloomberg conference examining London’s future as a financial center, Bailey urged the EU to decide sooner rather than later whether the city’s dominant clearinghouses can take business from clients inside the bloc, ahead of a temporary waiver lapsing in June 2022.

The decision rests on the EU side, according to Bailey, who said “the U.K. has made it very clear that we are in favor” of securing permanent access. The governor has previously said a quarter of euro-derivatives clearing business would need to shift to the EU if the bloc doesn’t renew the temporary permission, known as equivalence.

The U.K.’s withdrawal from the EU at the start of the year has caused ructions in the global financial markets, with trillions of dollars of trading already quitting London in the face of regulatory hurdles. A report published this month by data firm OSTTRA found that U.K. venues hosted just 8% of euro-denominated interest rate swaps trades in June, down from 11% at the start of the year and more than 30% in the months before Brexit took effect.

While clearing volumes have not yet made this shift, it shows that post-Brexit rule changes have the ability to reshape trade flows.

Bailey said it was “unusual” that the EU was attempting to force clearing activity to move across borders. “I think if they want to take a decision to break the system up, then it’s important to consider the risks to financial stability that come with fragmentation,” he said.

“This is not an idle ‘You would say that wouldn’t you’ coming from the the U.K. central bank. That’s a real threat.”

Bailey also sounded a note of caution about the development of digital currencies, saying the world’s monetary system was potentially facing its biggest shakeup in a century. “If some of the big tech companies want to have their own currencies that’s a big challenge to that system and we’ve got to think how do we respond to that.”

He added that he was “skeptical” big technology companies would allow themselves to be regulated in the same way as banks.