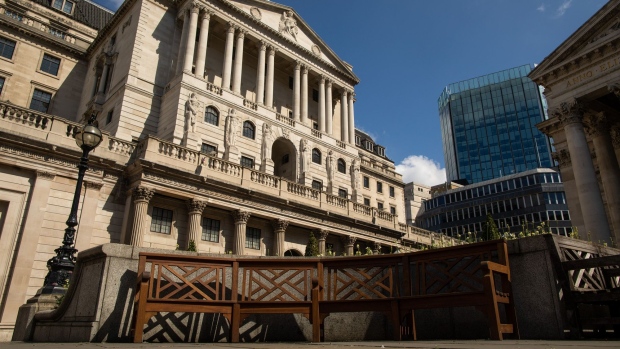 Empty benches sit outside the Bank of England (BOE) in the City of London, U.K., on Wednesday, May 6, 2020. Bank of England policy makers will meet this week knowing that they'll probably have to do more to combat the U.K.’s economic slump, if not now then soon. Photographer: Simon Dawson/Bloomberg , Bloomberg

(Bloomberg Opinion) -- The Bank of England is taking a risk by highlighting an exit strategy from its pandemic bond-buying program even before the U.K. has emerged from lockdown. If the economy fails to pick up, the bank could be forced into an embarrassing U-turn.

Governor Andrew Bailey indicated in a Bloomberg Opinion article on Monday that he might reduce the BOE’s swollen reserves before hiking interest rates, in what would be a reversal of the course set by his predecessor Mark Carney. This is a double-punch for those expecting an ongoing flood of money. Just last Thursday, the bank’s Monetary Policy Committee sent a clear message on tapering its Quantitative Easing program. Now, we have what could be interpreted as forward guidance on unwinding stimulus. The overall tone suggests that last week’s 100 billion-pound (US$125 billion) increase in the COVID QE package might be the last.

For a central banker in febrile times, these are bold signals. The U.S. Federal Reserve is the only major central bank to properly attempt to exit monetary stimulus since the global financial crisis. It raised interest rates several times before attempting to reduce its balance sheet. Bailey would reverse that order.

Even before the pandemic hit, the Fed had to cut rates aggressively again — under no small pressure from President Donald Trump — and rebuild its balance sheet by 70% because of a weakening economy. So there’s some logic to Bailey thinking about a different unwinding strategy.

However, talking about selling assets when still buying them might undermine the impact of the U.K.’s pandemic QE program before it’s had time to work properly. Lower long-term bond yields take a while to get through to the real economy. If investors start to steel themselves for fewer purchases, as well as actual disposals in the foreseeable future, that might push up rates on longer-maturity gilts, somewhat defeating the original purpose of QE.

This messaging is in stark contrast to other major central banks. The European Central Bank has just massively increased its provision of liquidity to lenders and its bond buying, whereas the Fed has been snapping up corporate debt for the first time — including some junk bonds. In fairness, the U.K. government’s fiscal response has also been substantial, and will probably be increased, so the central bank’s monetary actions have to be looked at in tandem with that.

Bailey is also signalling that official interest rates will stay very close to zero for several years, as raising rates will take a backseat to cutting leverage in the financial system. His comments reduce the likelihood of Britain trying more unconventional monetary experiments such as negative rates. Former BOE policymaker Andrew Sentance said in a tweet that he thinks Bailey’s intervention is an attempt to ease the pressure for sub-zero rates, a favored tool at the ECB and elsewhere.

The BOE can always increase QE again if it needs to, but that might damage its reputation for economic management. Understandably, the bank doesn’t want to be in the perilous position of the ECB, which has repeatedly stretched all of its resources to deal with consecutive crises. But there might have been some merit in waiting for the U.K. to show sustained signs of recovery before talking about snatching away the punch bowl.