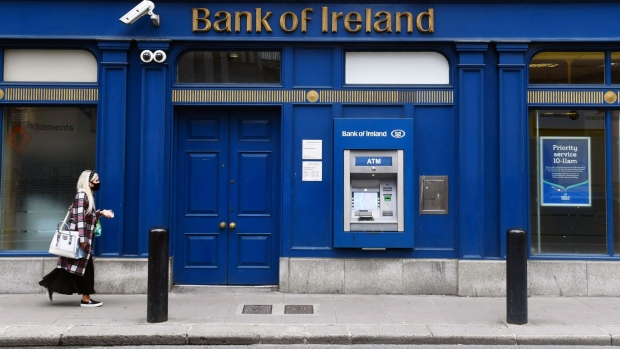 A pedestrian wearing a protective face mask passes a Bank of Ireland Plc bank branch in Dublin, Ireland, on Monday, Aug. 10, 2020. Ireland is one of the most open countries in the world in economic terms, according to the KOF Globalisation Index, having built its economic strategy on a low corporate tax rate and a plentiful supply of well-educated, English-speaking workers. Photographer: Aidan Crawley/Bloomberg , Bloomberg

Myles O’Grady is expected to leave the bank in March 2022 to take a “senior finance role in an organization outside the financial services sector,” the lender said in a statement. The process to find a successor has now begun.

The move “highlights the challenge that remuneration restrictions represent for Irish banks in attracting and retaining talent,” McDonagh said. “The lack of a level playing field means Bank of Ireland is at a competitive disadvantage to other companies, corporates and PLCs who are not restricted in the same way.”

McDonagh’s comments are one of the most direct criticisms yet by the industry on the restrictions. Pay is capped at 500,000 euros ($585,000) at bank’s bailed out by the government during the financial crisis a decade ago, while bonuses are effectively banned. The Irish government owns about 12% of Bank of Ireland and is in the process of reducing its stake.